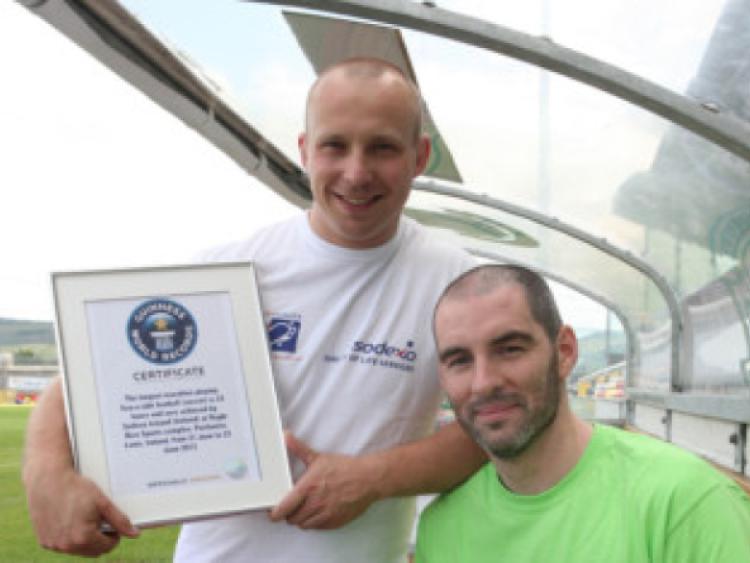 Newbridge man Jakub Zaremba can now call himself a Guinness world record holder as part of Irish team which set a new World Record success for the longest five-a-side football match ever played.

Newbridge man Jakub Zaremba can now call himself a Guinness world record holder as part of Irish team which set a new World Record success for the longest five-a-side football match ever played.

Joined by fellow Kildare man Brian Hanrahan from Clane, the duo were part of a 16 strong squad, who together played a 53 hour competitive match with a final scoreline of 695 goals to 601 last June.

“We had to play competitively throughout because that’s a key requirement and believe me, that was pretty tough going in the early hours of the morning after 40-odd hours on your feet,” said Organiser Andrew McGinley.

“We’re over the moon at the result and a huge vote of thanks, not only to the players who put in so much effort, but for the overwhelming support from dozens of work colleagues who travelled from all over the country to lend a hand.

It would be the icing on the cake if we hit our final goal of €20,000 for the three charities.”

The team beat the existing Guinness World Record of 43 hours by a comfortable margin, despite two players from the 16 strong squad dropping out due to injury early on.

A whopping €18,000 has been raised to date and the team are now looking for donations to to help the team reach their goal of €20,000.

The match, which was played from 21-23 June 2013 at the Nagle Rice Sports Complex in Portlaoise, was verified last week by Guinness World Records.

Donations can be made at http://www.mycharity.ie/event/sodexo_soccer_world_record/.