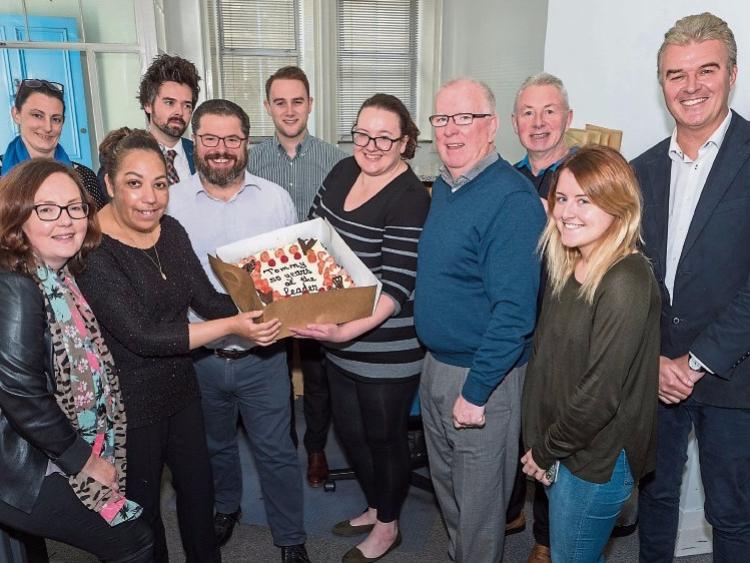 Leinster Leader sports editor Tommy Callaghan started as a printworks apprentice at the Leinster Leader's offices in Naas in 1967. Read his unmissable look back over his half century at the paper

There is an auld adage that goes along the lines 'Times fly when you’re having fun.' True or false?

But exactly fifty years to the day, yesterday, October 2. Take you back to the first Monday in October 1967. It was a day of no significance for most folk.

But for yours truly, and although not aware of it at time of course, it was a life-changer. Well maybe a life-changer is somewhat over the top. When you were the age I was back then, life was really just beginning.

On that first Monday in 1967 I walked through the big old green timber gates at the Leinster Leader offices on the Main Street, Naas, for the very first time. Well, not exactly true. It was probably the second.

I had attended an interview a week or so prior to that for a ‘chat’ with one William (Bill) Britton, or as we knew him at the time (and for ever more) Mr Britton. Managing Director. Managing Editor. The Boss.

Mr Britton was a man that few, very few, ever saw without a suit, a shirt or a tie. He was a gentleman held in the same esteem as the doctor, the garda sergeant, the bank manager, the solictor and the parish priest. A man you would step aside to allow him to pass.

Just once, I can recall him with shirt open; tieless and hair ruffled. That was the morning when a fire broke out in the bindery department and what with smoke, fire men, water hoses and the like, the MD had no time to button his shirt, don the jacket, knot his tie, or very importantly, Brylcream the gruaig. 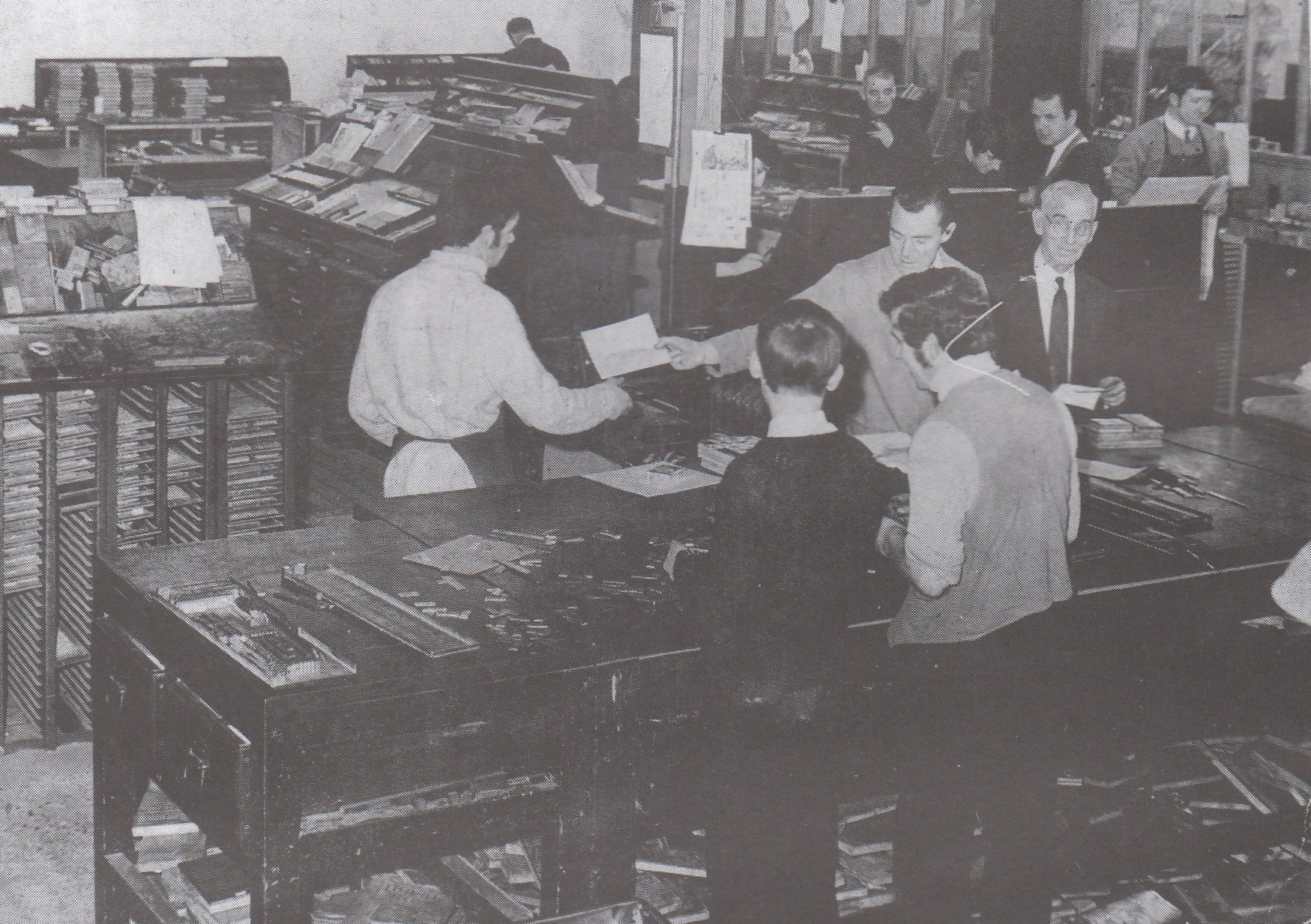 Tommy Callaghan, the Leader's longest-serving employee, is on the left of this picture, which was taken two years into his apprenticeship on the Leinster Leader print floor in 1969, during the hot metal era. Also picture are Cathal Teahon, Mick Kane, Mick Hickey, George Quinlan, Tom Murphy, Noel Singleton, Mick Carroll, Tommy Casey and Joe Campbell

But back to the job. Apprentice compositor is what I was after. Didn’t even know what a compositor was at the time.

It was a time when apprentices, and there was probably at least a dozen in the Leader at the time, were at the back of the queue. Back of the queue for everything.

Even as we left for the dinner (spot on at 1 pm — just as Mr Healy Rea once said, we were people who ate our dinner at dinner time; no lunch in those days) we apprentices would have to stand aside as the senior people scrubbed their hands in an effort to get at least some of the black ink off their hands. Dare a young apprentice jump the queue.

The foreman at that time was Ger Durney; soon to be followed by Micheál Kane, one of many senior men who went about their work in a meticulous fashion; and insisted young bucks that came in did exactly the same.

Life moved on quickly. Bolton Street beckoned. Beckoned for three years in a row. A three-month stay at a go in the Big Smoke, in digs, and we hardly out of short trousers.

Great times indeed. The clubs. The dance halls. The Countdown Club. The TV Club. The Irish Club. The list was endless.

LISTEN to KFM's Shane Beatty and Clem Ryan talk to Tommy Callaghan about his 50 years at the Leinster Leader on Kildare Today, Tuesday, October 3

It took some years but technology eventually caught up with the print game and changed it entirely. As the technology changed, so did many of our roles. From comp (compositor) to Linotype operator, to whatever came along, I always seem to be one of the ones (why, I have absolutely no idea) to move with it.

Eventually arriving in the editorial section. Was it by chance? Was it by hard neck? Was it by luck? A combination of all three I suggest. But something I always wanted.

Under the watchful eye of editor Senan Carroll, I went about learning an entirely different and exciting side of the paper I could have never dreamt about. Sport at that time was well down the list of priorities at the Main Street HQ in Naas. Gaelic Games was mainly covered by the county PRO. Racing by Newbridge man Sam Weller. And that was about it.

At that time there were few, if any, midweek race meetings, and predicting winners at least four days in advance, even before the official declarations were made, was some ask.

It was often said at the time that Sam had a good week if he predicted three runners — not winners, mind you, but runners.

Time moved on and quickly. Eventually in the late ’80s, early ’90s, as sport began to expand in the paper, I got the gig I am still in to this day.

The rest, as they say, is history.

Great times. Exciting times. Brilliant times. Disappointing times. Some day, maybe, maybe not, we might get around to putting it all down on paper.

But for now, the paper takes another step forward with a new redesign. Another makeover, but just as I moved along to various departments and areas, it is a pure coincidence that that new-look Leader coincides exactly with an event that began on the very first Monday in October, 1967.

Time does certainly fly when you’re having fun. Here’s to you! 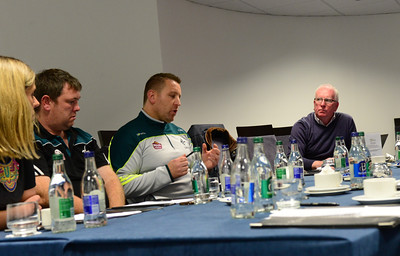 On the ball: Tommy Callaghan listening to Kildare manager Cian O Neill at a press conference in Naas in 2016. Photo: Adrian Melia 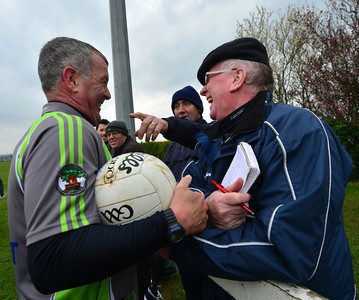 Game for a laugh: Cracking a joke with referee Fintan Barrett in 2014. Photo: Adrian Melia 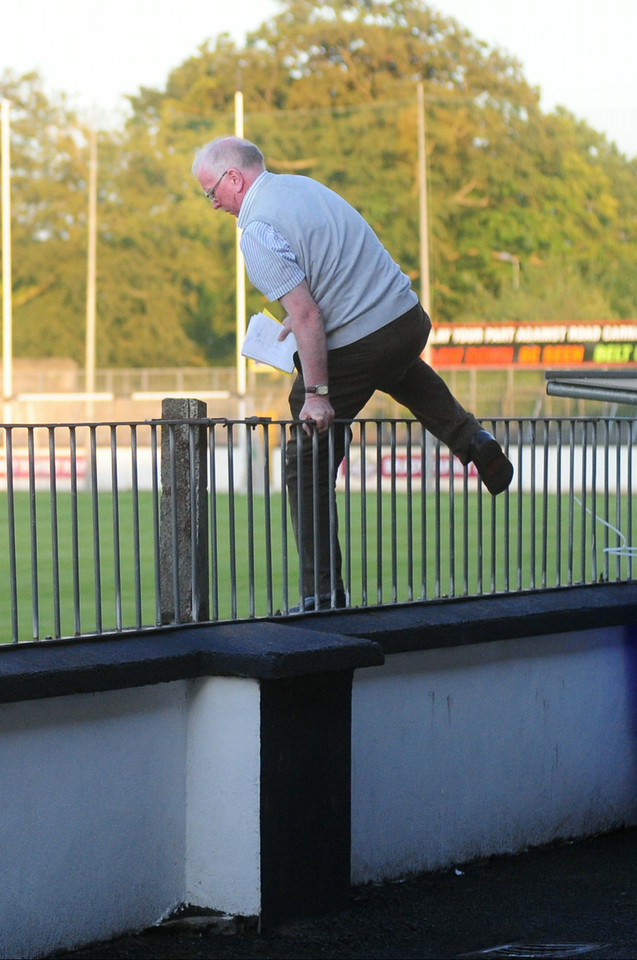 This job's all glamour... Tommy Callaghan stages a one-man pitch invasion to get his story!