Mayor of Kildare on his New York trip

Diary of an Kildare man abroad 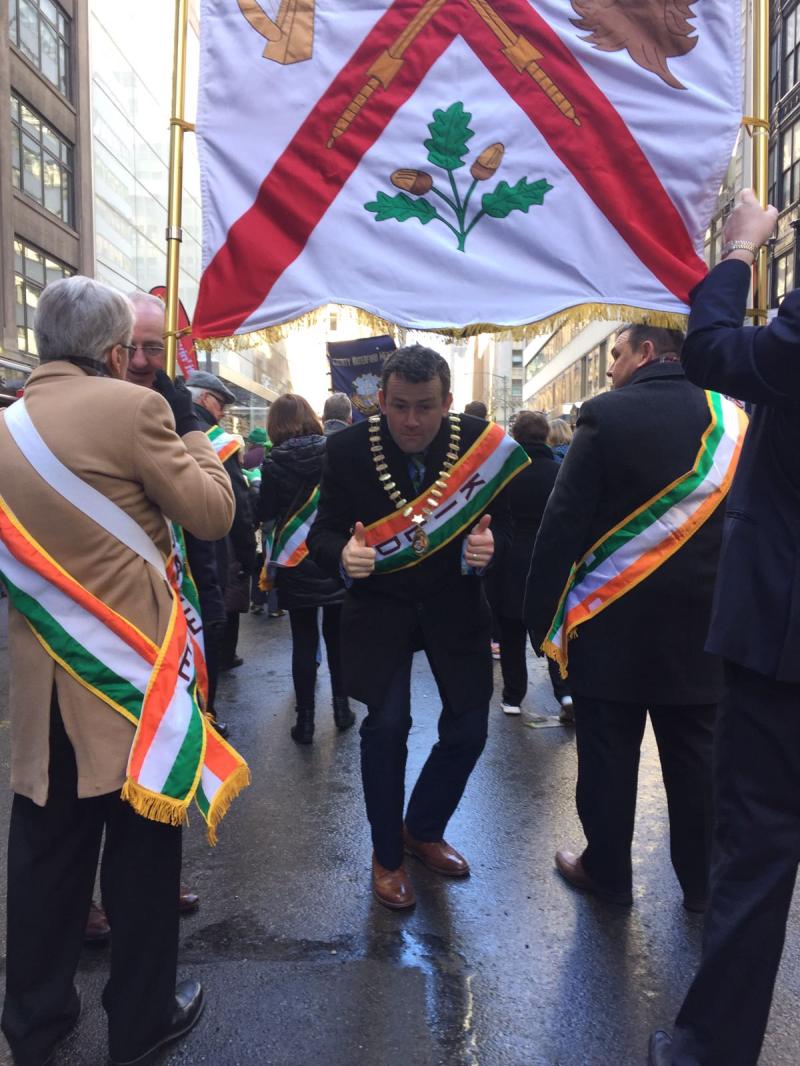 To give Kildare people an insight into why the Mayor of the county travels to New York every year for the St. Patricks Day parade, the following is a diary of this year’s visit by the Mayor Ivan Keatley in his own words about this year's trip and what events he enjoyed during his stay.

Myself and the Chief Executive of Kildare County Council Peter Carey began our visit with appointments with the IDA, Enterprise Ireland and Tourism Ireland at Ireland house on Park Avenue. It was reassuring to see how optimistic the IDA were about Ireland’s future prospects in attracting and consolidating foreign direct investment in-spite of the political climate. We were keen to point out the obvious key advantages in locating in Kildare such as the motorway network and access to airport and port, consolidation of zoned commercial land in our recently adopted County Development Plan, an educated workforce and access to key infrastructure.

Enterprise Ireland and Tourism Ireland outlined their key strategies to us, for gaining access to the US market in separate meetings later that day and we were able to discuss the challenges and opportunities that our Local Enterprise Office and Kildare Failte have in order to fully exploit Kildare’s potential in both areas.

All three meetings also gave us an opportunity to present the agencies with our unique new promotional video packs commissioned by KCC and our LEO and they were very well received.

St Patricks Day began with a visit to St Patricks Cathedral for mass celebrated by Cardinal Timothy Dolan.  It might seem like an unfashionable thing to say but mass was one of the highlights of the weekend, especially the singing of Amhrán na bhFiann and The Star-Spangled Banner at the end, amplified by the enormous and impressive vaulted cathedral ceilings, which was full of emotion and pride.

It was on then, to 34th St on 5th Avenue to greet our fellow Kildare people who gathered from all over New York and some on holidays from Ireland to get ready to lead them under the NYC Kildare Association banner down 5th Avenue to 81st street. A tradition that started in 1896, the parade took an hour and a half and it’s hard to describe the scale and size of the place, sky scrapper after sky scrapper. Starting at 11am the line of Marchers were still passing Trump Tower at 5pm. It’s fair to say that our Irish American community bring celebrating St. Patricks day to a whole new level.

On Saturday we visited Ground Zero to view the memorial to the victims of 9/11 and the exhibition centre that has been built on the site of the Twin Towers. It was an extremely poignant afternoon as we were part of an eerily silent crowd taken through the tragic events of 9 /11. From speaking to many Americans and in particular, Irish Americans following the recent election of their new president, I wonder how much we have learned since that awful day.

The biggest highlight of the trip for me was the unbelievable friendship and hospitality we were shown by everyone, especially those in the NYC Kildare Association.  In particular the appreciation they showed to KCC in allowing the Mayor of the day the privilege of travelling to the US to show solidarity and to help continue the connection they have with their county. Nowhere was this more evident than at the Association’s dinner on Sunday night in Yonkers where I met people from Castledermot to Coill Dubh, Carbery to Straffan and everywhere in between.

At no time in recent history has this been more important. Their appreciation was emphasised by the current president John Duggan in his speech that evening in Yonkers where the gathering of Kildare people on a spring evening and the Irishness of the place made it feel more like Athy or Naas than anything you would expect to find in the Big Apple.