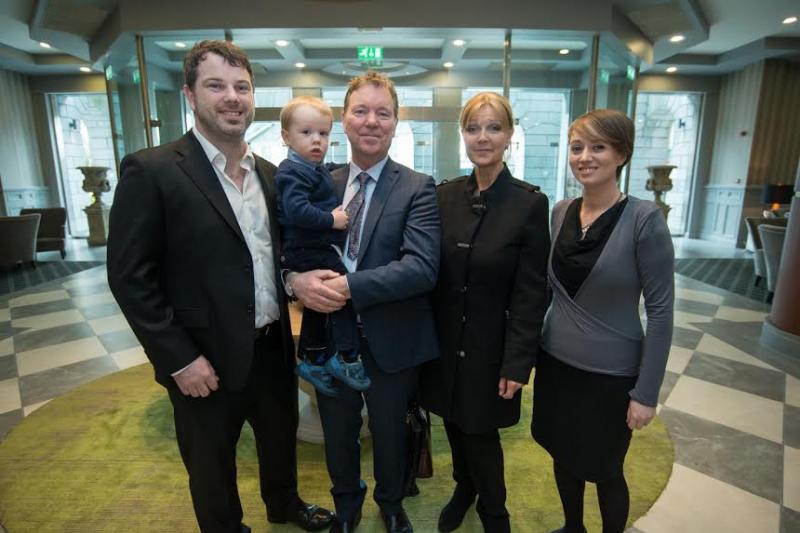 Superintendent Joe Prendergast was appointed to that rank at the Kildare Garda District Headquarters in 2012 and served for two years before moving to Portlaoise. He retired from the force last Thursday - recalling another memory of an earlier posting in the Lilywhite county, when he was the junior garda told to guard the stable after Shergar was kidnapped from Ballymany in 1983

When Joe Prendergast joined An Garda Siochana on May 14, 1980, Johnny Logan had just won the Eurovision Song Contest with 'What's Another Year' and everyone wanted to know Who Shot JR.

Thirty-seven years on and Superintendent Prendergast recalled that era at a coffee morning to mark his retirement from the force in the Portlaoise Heritage Hotel last Thursday morning.

A large crowd of colleagues and friends turned out to mark the Mayo man's almost four decades of service.

Inspector Aidan Farrelly was on duty as MC for the occasion and he noted Joe Prendergast's "sense of decency and fair play, as well as his commonsense approach." On behalf of the civilian workers in Portlaoise, Margaret Fitzpatrick wished Supt Prendergast all the best in his retirement.

"He led by example in pursuit of high standards. He had great empathy with people, both internally and externally. He was a man of conviction who spoke his mind.

"Being Superintendent in Portlaoise was a difficult challenge with 12 stations and two prisons. It also had the satellite towns which sprung up during the boom and which brought their own challenges. He did his job exceptionally well with his team," he noted.

Supt Cashin made a presentation to Joe Prendergast on behalf of the Superintendent's Association and Birr Garda District. The Portlaoise Social Club also presented Geraldine Prendergast with a bouquet of flowers.

Chief Superintendent John Scanlon said that Joe Prendergast was a consummate professional. He was gentleman who dealt with issues humanely.

"He is part of what is sometimes criticised as the old school, but the old school has something good to offer -  tradition, loyalty and dedication. Those of you who wish to decry the old school, we could do with a lot more of it these days. We could certainly do with loyalty to this organisation and what we do. Joe was a loyal and a valued colleague."

Joe Prendergast said he was leaving the job in a positive frame of mind. He recalled fallen colleagues who never got the chance to retire.

"This job allows you to make a positive difference in peoples lives. You are there with them in good times and when they are at their lowest ebb. I hope that in some way I helped make peoples lives better.

"I am very proud to have worked with people of the highest caliber. This job is about doing good and being on the right side."

He noted that he served in seven different stations, and made 11 moves. He was in Kildare twice; Banager twice and Portlaoise three times, as well as Tallaght for a year and a half.

A memory of his time in Kildare was the kidnapping of Shergar in February 1983.

"As a junior Garda I was given the job of minding the stable the morning after the horse was gone. I don't know what happened to Shergar but I know he never came back on my watch."

He also spent six years in Tullamore as an Inspector and was appointed Superintendent in Kildare in 2012. "That was a time when resources were tight and I admire how people showed what they were made of when their back was to the wall.

"In recent times some people have been pontificating from their studio armchairs about Garda culture and using words like systemic, and saying it needs to be eradicated as quickly as possible.

"I can tell you that I'm a witness to Garda culture and, in my experience, it is men and women who are doing a difficult job to the best of their ability and putting themselves and their safety on the line on a daily basis. That is the Garda culture I know.

"We are very lucky in Ireland that the Gardai have the support of the vast majority of people. They know what we are about and they are behind us. There is a minority that are against us, and that is because we interrupt their way of life.

"In Portlaoise in the last six to eight months we have had Gardai assaulted, kicked and spat at and seriously assaulted. Some are out on sick leave. However, there is a resilience there day after day.
"Always hold your head up, you are on side of right.

"We should not mind criticism and we need to change but I am very proud of the garda culture I know and long may it last.

Superintendent Prendergast thanked his family and also mentioned his mother, who will turn 96 in October.