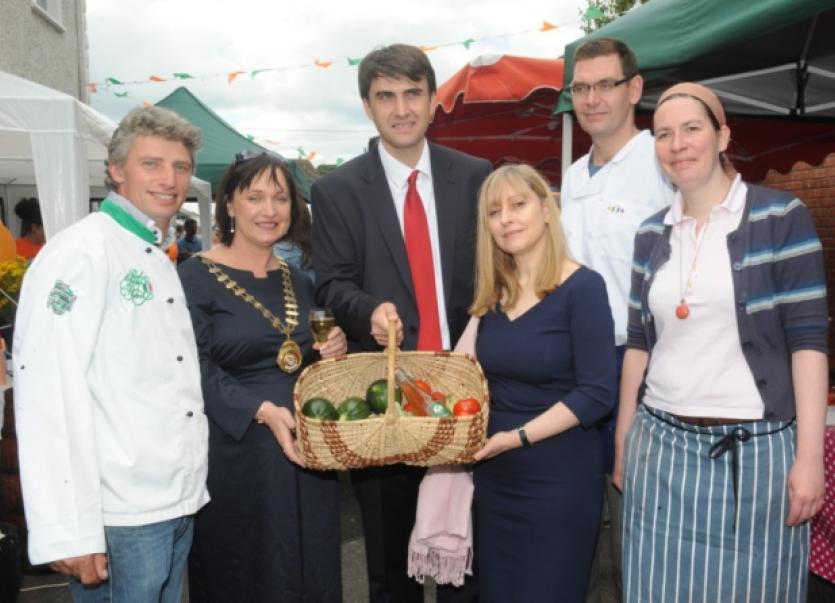 The French Ambassador Gerard Cairet and his wife Dr. Pascale Cairet were among the crowds who flocked to the French Fun Market with all proceeds going to the Jack and Jill Foundation.

“We knew some people involved in the charity,” said Aymar Gourdet, owner of the restaurant on Station Road. “We like the work that they do. We have children and we know that if one of our children was sick we would want to bring them home. The Jack and Jill Foundation does great work.”

The vendors from Naas Farmers Market, which is held at Trax Brasserie off Friary Road every Saturday morning, came along for the afternoon and there were also pony rides, music and dancing, family fun events as well as local crafts and food.

Breda and the children from Dancetones Studios were there all dressed in the French colours, Brownstown IFDC put on a wonderful display, local musician Stephen Ukejnome came along too.

There was also a display by Pat Sweeney of the Kildare Town Twinning Committee, Lisa Sheridan did face painting and mascot Billy the pony was a huge hit with the children.

“My mother Marie-France Raluy came over from France and wore her Brittany outfit for the event and made traditional pancakes. We had great support also from Kildare Derby Festival, Oliver from Organic Me farm, and John Osborne of the Irish National Stud who organised a tour for the Ambassador and his group, The Kildare Tourist Office and Maureen Conway at Kildare Village, Liz and Tara Prendergast, Mayor Fiona O’Loughlin, Tina Priestly from Jack and Jill, Febvre Wines, farmer Mick Dempsey who organised the pig on the spit, our customers, family and friends - everybody really got behind the idea and I want to thank everyone sincerely for their help.”

“From about 11am to 5pm the place was jam packed,” added Aymar. “It was a wonderful cultural event.”

The market raised E650 and Aymar also donated a similar amount from the restaurant bringing the total to E1300 for the Jack and Jill Foundation.

“People have been asking when are we going to do it again,” said Aymar. “We are making plans.”