Dancing back the years in Coill Dubh 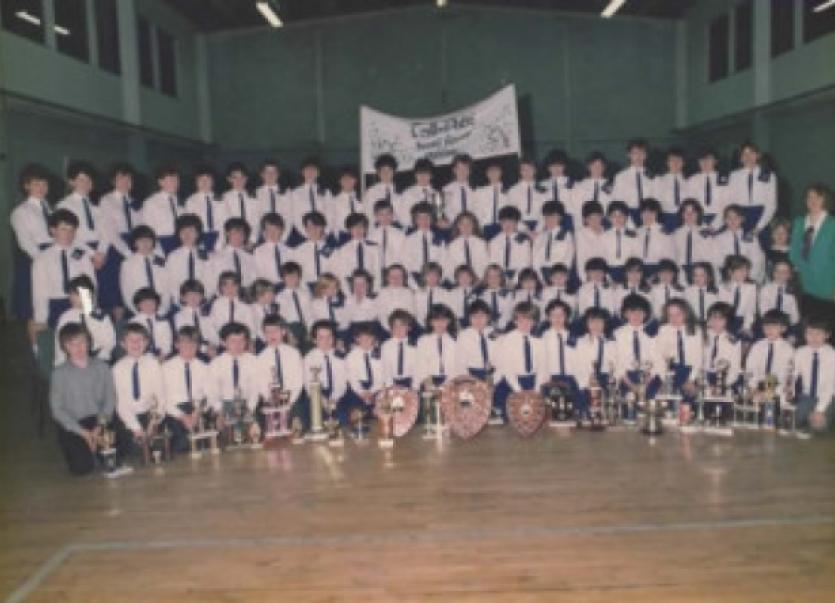 Many of them are now in their 40s, but in 1985, when a new figure dancing class started in Coill Dubh, they were all young girls, eager to try something new.

Many of them are now in their 40s, but in 1985, when a new figure dancing class started in Coill Dubh, they were all young girls, eager to try something new.

Noreen Power, a ‘townie’ transplant from Newbridge, married and moved to the village of Coill Dubh in the early 1980s and loved it there.

In 1985 she set up local Figure Dancing classes and in a few short years, an army of young girls was winning competitions everywhere they went.

Just before Christmas they gathered for the first time in many years to relive the memories of their time on the boards.

Says Noreen: “The first night of the classes was a great success. The classes were held on Tuesday nights from 6.30pm to 9.30pm, and cost 20p”.

Classes moved quickly from the school to the local community hall as the numbers grew.

“1986. What a year. Our little village went on to beat our greatest rivals, Newbridge, with Sandra Young as class captain receiving the County Cup to screams and rapture of 140 dancers,” Noreen recounts.

“All achievements aside, figure dancing was much more than just learning to dance. I have great memories of my neighbour Esther hanging out my washing so that we could clear the kitchen floor to train.”

She also recalled the late Rose Kenny who was a “master of French plaits who started at seven in the morning of a feis, making sure we always looked our best”.

And Noreen also recalls the “pleasure of attending 10 o’clock mass on Sunday’s and seeing the many blue uniforms scattered throughout the congregation, ‘praying for a good day’.

“The one thing I will always be grateful for in those years was the unbelievable support of the people of Coill Dubh with our annual Christmas raffle being a great success allowing our dancers to have fabulous Christmas parties that they look back on with great memories.”

At the packed event in Woodlands Golf and Country Club recently there were several acts, but the highlight was when the dancers took to the floor.

There was applause and tears as the memories flooded back. “Some of them are now in their 40s and they gave as fabulous and energetic an exhibition as they did back in the 1980s. It was spectacular to watch!”