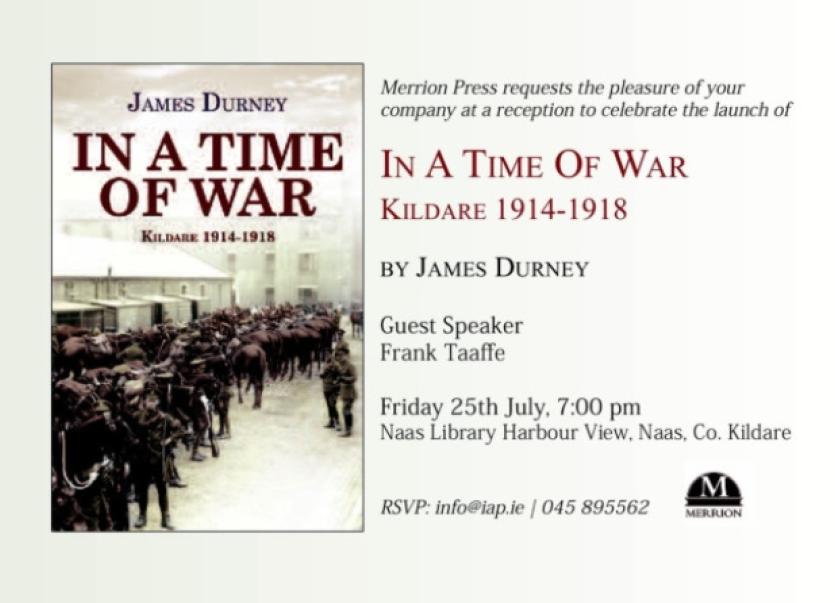 Did you know that Kildare supplied a huge number of horses to the British Army during World War 1, so many that it left the local farmers with a serious shortage of horse power?

Did you know that Kildare supplied a huge number of horses to the British Army during World War 1, so many that it left the local farmers with a serious shortage of horse power?

Or that people in Kildare during that time were busy supplying food to Britain and that companies were established to make crutches, splints and blankets for the men at the front?

The latest book by James Durney, “In A Time Of War – Kildare 1914 – 1918” not only deals with the political, economic and military history of the time but also gives an insight into what life was really like for Kildare people trying to cope with events during the war years.

It covers the war on the western front and famous events like Gallipoli, the Easter Rising, the elections of 1918 when Sinn Fein won two seats in Kildare, the Potato Case, the Great Flu when Kildare had the highest death rate in the country, the refugees who arrived in Ireland particularly at Celbridge Workhouse, and all the major the international events of the time.

James also looks at the impact on Kildare people. He examines the lives of local women forced to cope alone when sons, brothers and husbands left to fight in the war.

He also looks at the lives of the men who returned – who were alienated, deemed too have fought on the wrong side in the wrong war.

The often underestimated effects of shell shock on society at the time in Kildrae are also dealt with. Unrecognised at the time, post traumatic stress disorder and shell shock often led to murders and suicides.

The author James Durney, who works at the Local Studies Department in Newbridge Library, has produced over a dozen books to date.

His latest book, published by Merrion Press, is available in all local book shops.