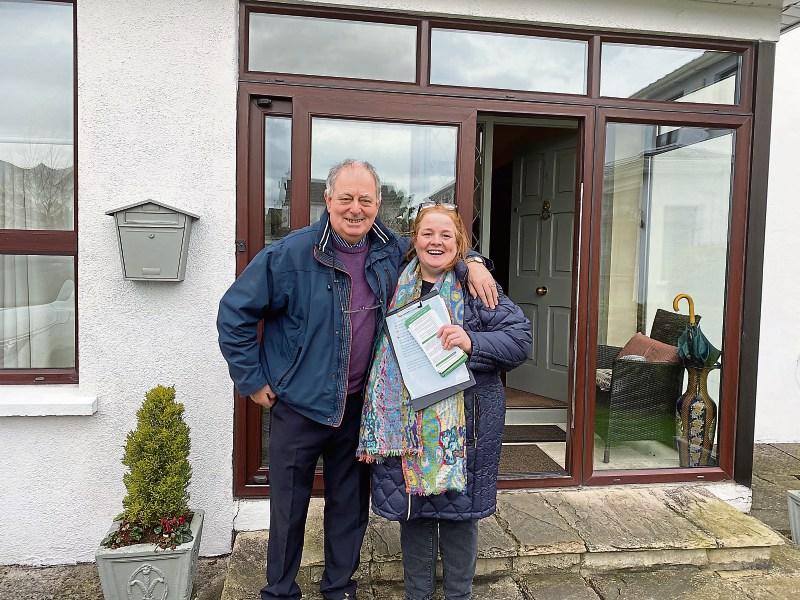 We are on the canvass with long-time local councillor and first time Dail contender Suzanne Doyle and it is my job to get a sense of the issues coming up on doorsteps.

The Fianna Fáil hopeful tells me that Mr Ryan is the primary caregiver for his wife.

“I'm on the clock the whole time,” he says. He is not on his own in this situation — and the conversation moves to the huge number of people saving the government a fortune by caring for loved ones at home.

“More needs to be done for them,” Cllr Doyle adds.

Several houses are empty as the occupants are at work and that brings us to the next issue — commuting woes.

“There’s a lot of people commuting by car or train from Kildare town to Dublin,” she adds. “Time is the big issue for the commuter — everybody needs more time that could be spent with the family instead of on the commute.”

The solution, according to this candidate, is local job creation, hot desks and hubs.

“It is expensive to do business in Dublin and we could offer more competitive rates here in Kildare. Bord na Mona, for example, was a big employer locally and it could be again in the future. The commute will be a big challenge for me if I get in and if I don’t I'll happily stay around as a local councillor.”

Another issue on way round is social housing and better terms and conditions for SNAs, creche workers, CE workers — and the defence forces.

“FF have plenty of issues to tackle and we will just have to roll up our sleeves and do it,” she says as we arrive to a big welcome at Tony Monahan's house.

“The election takes on a different complexity when you have a local candidate,” he explains. “Suzanne looks after us more than well.”

The next stop is Pat Sweeney’s house, where we are invited inside to see the Relics of St Therese and hear of her miraculous healing powers. Cllr Doyle takes the opportunity to touch the relics and declares: “If I get elected — if that miracle is carried off — I'll know who to thank.”

There is no doubt Cllr Doyle is well known around here having put in the work for the past 17 years. “I am a local councillor but I don't want to let this opportunity to get to the Dail go.”