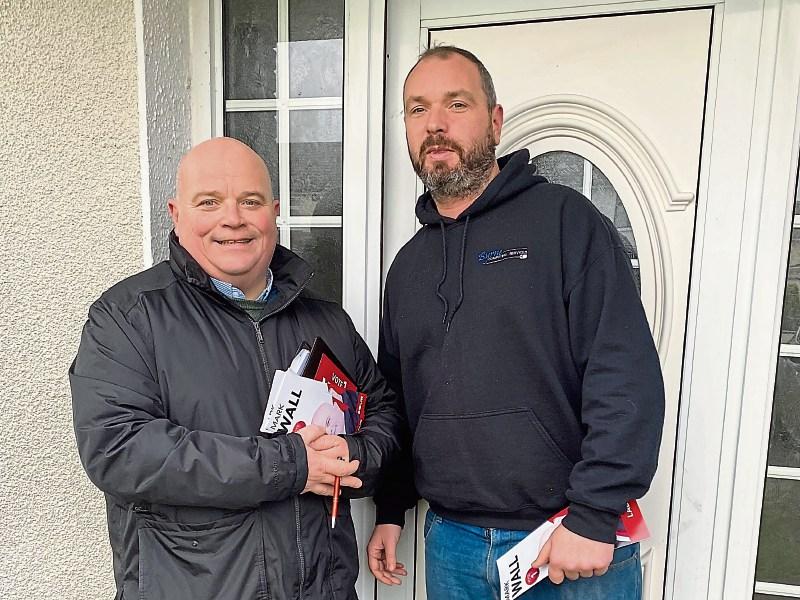 “I’d like to see more jobs in Athy to help keep the youngsters here,” general election Labour candidate Mark Wall is told on the doorstep as part of his canvass in Athy last Friday.

The chosen estate is Ashville and the lady in question, who preferred not give her name, has a son sitting his Leaving Certificate this year.

“It will break my heart if he has to go away for work,” she explains.
Jobs is one of a number of issues raised on the canvass but it is to the fore here as the estate is opposite the Old Model School in Athy that failed to get government funding earlier this month for an innovative hub putting local job creation at risk.

“The plan is for 120 jobs at the hub and then to help 180 people improve their skills and seek employment,” said Cllr Wall.
“This is huge for Athy.”
The issue of jobs is also the first thing resident Michael Byrne mentions at his door.
“I would have taken one of the hot desks,” he said.
“I sometimes use the library but we need to get the hub up and running.”

Cllr Wall said that he is getting that feedback a lot adding that the big sign denoting it's imminent opening is hard to miss.
Health is another big issue for local householders as well as lack of housing, so no surprises there.
The increase in rural crime also comes up.
“Crime is huge,” he added.
“We had a public meeting last week and rural isolation was recognised.
“There is the €300 grant for a home alarm but we need more garda resources - that is the bottom line and there was a lot of anger in the room over that.

“We are lacking in resources and only have one garda on duty at times coupled with the fact that we are so close to the motorway in South Kildare.”
The next house is not a Labour one but Cllr Wall is getting the vote because it's all about having a local TD in the Dail. “I’m usually vote Fianna Fail but it's all about getting a local TD and I don't know the other FF candidates. Id love to see a local TD get in.”

All politics is local and here is the proof as another resident tells us: “I’ll always vote for locals,” adding that she is not happy but “won't go into that”.
Cllr Wall is hoping that voters want to see a change in government this time round.
“I am trying to use my local experience on a national stage,” he says.
“We've done a lot of work since the last election and hopefully it will be reflected on the day.
“I think people want to see change. More housing, employment, lowering the pension age, reduced crime and better childcare costs are some of the changes people want to see.”