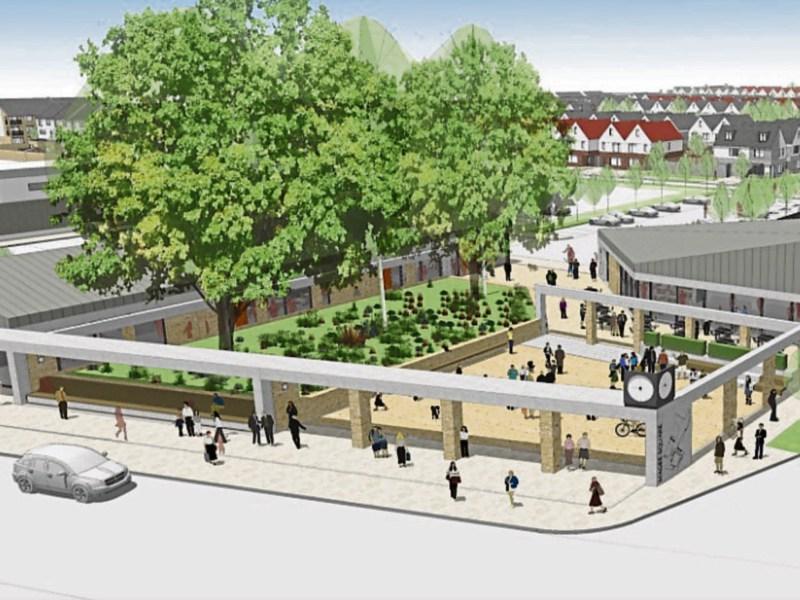 Artist mock up of the new development

A meeting was held in Kildare town on Saturday November 2, last to address concerns after planning permission was granted for 375 new homes at the former Magee Barracks site in Kildare town, alongside a state-of-the-art €100 million cancer treatment clinic.

An Bord Pleanála has given the go-ahead to Ballymount Properties Limited for 375 homes and a creche located to the east of Hospital Street, in Kildare town.

The meeting was organised by Mayor Cllr Suzanne Doyle to address the lack of services and infracstructure in Kildare town to accommodate the new development.

“We are going to draft up a ratio of services to current population and rate of growth,” she said.

“We will distribute it to each household to build awareness. We are also going to seek legal opinion to see if a case can be taken, which would have to be done within the next eight weeks.”

Concerned residents in Kildare town said last August that they may consider fundraising up to €30,000 to mount a court action to oppose a large housing plan for the former Magee Barracks site.

A public meeting was held at the time to discuss the massive development for the ex military location and were told that up to €30,000 may be needed to pay for a judicial review in the High Court if An Bord Pleanála granted permission for the project.

The August meeting addressed specific concerns that employment and leisure facilities were badly needed in the Magee site and that the proposed homes could lead to a potential influx of 1,000 new residents which would not be sustainable. Concerns were raised about the lack of GP services in the town and school places.

The development will consist of the demolition of 17 existing buildings including a range of former barracks buildings, the Officers’ Mess building and a water tower structure and the construction of the 375 residential units, a neighbourhood centre comprising of three single storey retail units, a cafe and a creche.

ABP has attached 19 conditions to the Ballymount permission. It stated that in making its decision the Board had regard to the location of the site on lands zoned for regeneration and mixed use in the Kildare Town LAP 2012-2018. It also said that the nature, scale and design of the proposed development is consistent with the provisions of the KCC Develpment Plan 2017-2023 and the Rebuilding Ireland Action Plan for housing and homelessness 2016.

Another reason for the decision it states is the availability in the area for a wide range of social, community and transport infrastructure. It added that the development will have a positive impact with regard to population and material assests due ot the increased housing stock that would be available in the town. The landscape and visual impacts will reflect and increase awareness of the site’s military heritage, while traffic will be mitigated by the phasing of the development and by the completion of a package of local road improvement measures.

A condition of planning states that the phasing plan be revised with the apartments built in Phase A to ensure the timely provision of services, for the benefit of the occupants of the proposed dwellings. Another condition states that a secure outdoor play area shall be provided for the use of children attending the childcare facility in the interests of residential amenity and safety.

In terms of traffic it stated that all works to public roads and footpaths shall be completed to taking in charge standards and shall be to the satisfaction of the planning authority. Full details of cycle parking facilities with provisions for direct and unobstructed access to all cycle parking spaces and full details of the management of the pedestrian access to the adjoining school site shall be submitted for the written approval of the planning authority.

And at least one car parking space shall be allocated to each residential unit within the scheme. These cannot be sold or let separately from the residential development to avoid non-take-up by occupants. All car paking spaces must be ducted for future electric vehicle charging points.

Meanwhile the Bord has upheld, on appeal, the planning permission grant to Londsale Ltd by Kildare County Council for a Proton cancer treatment centre on a separate part of the site.

The applicant appealed against several of the conditions imposed by Kildare County Council.

ABP has decided to remove three conditions from the permission, and amend condition 25, so that the developer shall pay KCC the sum of €243,600 as a special contribution in respect of the provision of traffic calming works including Toucan Crossings along a section of the front and either side of the the Magee Barracks road frontage.

Londsale can now proceed with demolishing six buildings on the site, and build the cancer treatment facility on the 2.5 hectare site site.