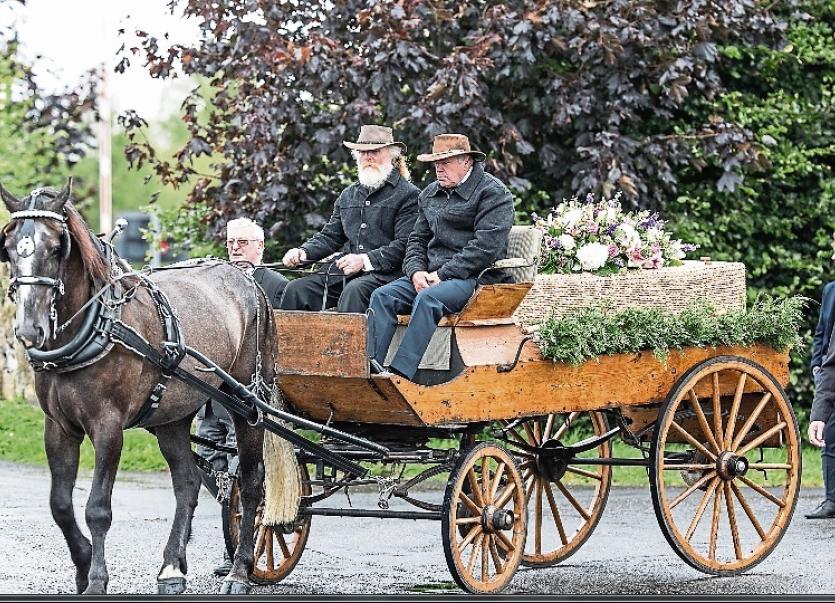 The funeral cortege of the late Stan Cosgrove

Mourners filled St Peter and Paul’s Parish Church in Monasterevin for the funeral mass of pioneering veterinary surgeon Stan Cosgrove, who was a stalwart of Moyglare Stud for more than half a century, on Monday morning, September 2.

The funeral mass was celebrated by Parish Priest Fr Liam Merrigan alongside visiting priest Fr Justin Gillespie, and it was also live streamed around the world including Australia where Stan’s granddaughter Laura was watching the service.
Stan Cosgrove, of Barrow House, Monasterevin, was a significant figure in Irish racing throughout a long and productive life.

He was thrust into the limelight as Shergar’s vet when the champion racehorse was sensationally kidnapped from Ballymany stud in 1983. He had been a shareholder in the stallion before the Derby winner's infamous kidnapping.
He appeared in the BBC-shown documentary Searching For Shergar and it is said that he gave £80,000 to act as a partial ransom in a botched garda sting to recover the horse

The congregation heard that despite all of life’s difficulties, grief, accolades and struggles, Stan was a man who strove to be happy on earth.

He was described as a loving husband to his late wife Maureen, and father to his 10 children Mary, James, Catherine, Veronica, Michael, Paul, Nicola, Emma, Johnny and Sara as well as his grandchildren and a great-granddaughter. He passed away just shy of his 92nd birthday, on September 3.

“He leaves a very, very large hole in the lives of his loved ones and friends – we are grateful for his presence in our lives,” said Father Gillespie, who recalled the late man’s sense of fun and good humour with the congregation.

His son, Johnny Cosgrove, told the congregation that his father was a pioneer as a vet who broke multiple boundaries in his field. He was the second eldest of six children born to James and Elizabeth, and he grew up in Newbridge. He studied veterinary science in UCD and qualified in 1952. He married his wife Maureen in 1959.

Stan was a founder of the RACE Academy education centre in Kildare and was a member of the Turf Club for more than 40 years. He became a small breeder in 2002 and won numerous awards in the course of his career, including an induction into the Hall of Fame in 2002.

Johnny said that Shergar’s kidnapping was a financial blow which his dad likened to a game of snakes and ladders. “Sometimes you are up and sometimes you are down, but the most important thing is to dust yourself off and start again,” he said.

He gave a special thanks to the palliative care team who looked after his father until the end. He also said that his father left instructions that he didn’t want a eulogy, one of the many times the congregation burst into laughter as he recalled with humor his late father.

“He would say that’s all irrelevant,” he added. “His real legacy was his love for mum. They were an incredible couple and spectacular parents with a deep sense of love and commitment to one another. There was a fantastic chaos in our house and no rules. Up to the time mum died in 1997 he worked nonstop.

“To be honest we didn’t know dad then, as mum was the homemaker, but he became our own Mrs Doubtfire. He began by ringing each of the 10 of us every day after mum died. At first there were lots of pregnant pauses but bit by bit a deep and meaningful relationship blossomed with each of his children.

“He loved people and he was a friend to his grandchildren. He got more colourful as the years went by and aged 80, he got rid of the glasses and got 20-20 vision. He loved a chat; a cigar and wine and he didn’t do convention.

“He was a man of deep faith and a member of Opus Dei. He loved God but he was in no rush to meet him in person. He had a relentless energy and integrity and he strove to do the best in his daily life. He was generous of pocket, time, support and encouragement. He was a big thinker to whom everything was possible. He made things happen and he had a sense of his own convictions. Dad we are so proud of you and to be your children.”

Stan Cosgrove was laid to rest in a simple a wicker casket, which left the church surrounded by family to the sounds of Time to Say Goodbye by Andrea Bocelli. He was carried on a horse drawn carriage to St Evin’s cemetery in Monasterevin, where he was laid to rest.