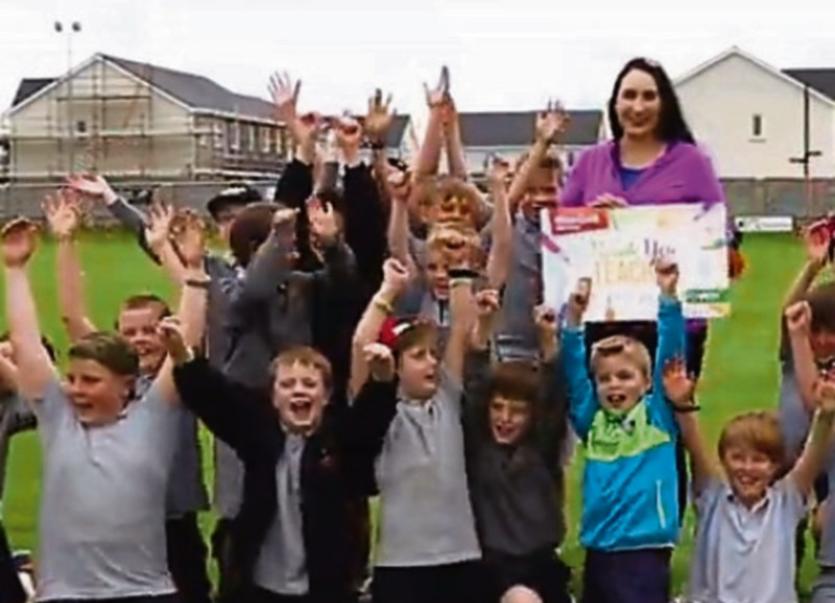 Ms O'Toole with her class at St Peters in Monasterevin

A second class teacher with a primary school in Kildare has been given a top teacher status this week.

Ms O’Toole, second class teacher at St Peters in Monasterevin, has been crowned winner of a national competition that recognises teachers who go the extra mile, run by One4all.

The public was asked to show their appreciation for Ireland’s superstar educators by nominating a teacher, they believe deserves an extra special thank you.

Ms O’Toole was nominated by the parent of one of her students, Cliona Stephenson. Cliona’s heartwarming entry blew the judges away as she described the kindness and positivity Ms O’Toole shares with her students.

Cliona couldn’t speak more highly of her son’s teacher, telling One4all that Ms O’Toole is “more than a teacher, she is a guardian,” to her students. In her entry, Cliona describes how Ms O’Toole goes above and beyond for her class organising fun activities such as a recent pizza party and how she truly cares about their mental health and well being, continually putting in extra hours, showing her dedication to her students.

Commenting on Ms O’Toole’s win, Cliona Stephenson said: “The second-class boys couldn’t be luckier to have such a caring and attentive teacher. The reason I nominated her is because nowadays life can be so difficult for children and a good teacher can have such a positive impact on them and make a real difference in their lives. Ms O’Toole is a great example of what a brilliant teacher is.”

There were 943 entries from across the country received, according to organisers.