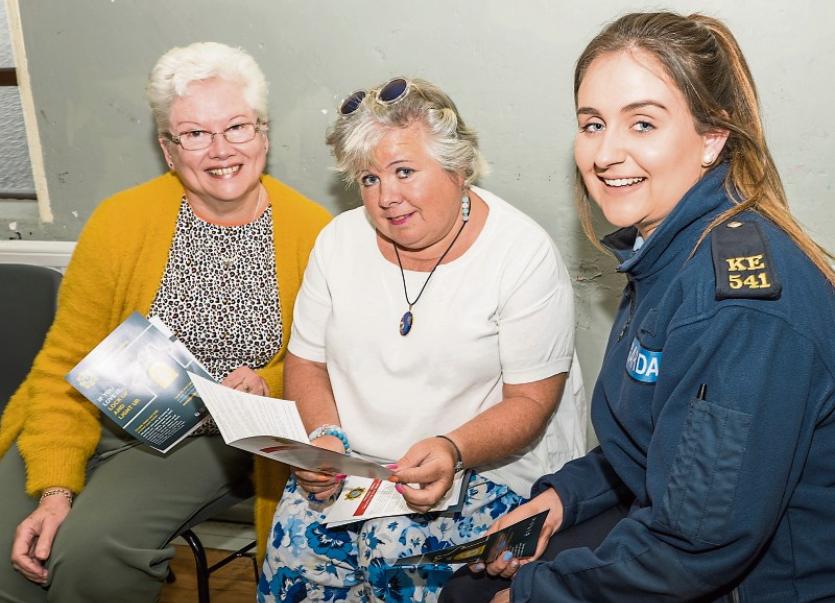 “It will be very important to have a community text alert service in Monasterevin. I’m not the bravest person so I think I will sleep better and feel safer knowing it is here.”

These are the words of one elderly lady, who lives alone, who went along to the open morning at the Monasterevin community hall on Thursday morning last, June 6.

The coffee morning was held as an informative meet and greet with local gardaí to set up a community text alert scheme and in attendance were Sgt Josephine Dowling, Community Liaison garda Gavin Dunphy and Garda Evanna Harty.

“The biggest thing is to get the word out there,” said Garda Harty.

“We have the text alert service up and running in Kildare town and it is going well. Monasterevin would have a big farming and rural community.”

Those in attendance were given consent forms to fill out, allowing their mobile phone numbers to be added to the text alert in their area.

All those involved must fill out the form which is available at the garda station. Volunteers will also go door to door with the forms asking people if they are interested.

All forms must be signed and returned back to the garda station and there is a contribution of €10 to cover costs.

“This is a good service for vulnerable or elderly persons who live alone,” she added.

“We are hoping to have it set up soon especially by the end of the summer — when the evenings start to get dark again as it is the time people need it the most.”

Although the crowd last Thursday morning was small enough, there was a great crowd at a recent meeting showing that the interest locally is strong for the idea.

“It is hard for people who are working to attend a morning meeting,” said newly-elected Cllr Kevin Duffy of Fine Gael who was in attendance alongside Cllr Patricia Ryan (Sinn Féin). Both are resident in the town. “There was a great crowd at the first information session which was held in the evening time so it shows there is a good interest in it locally.”

One participant and volunteer for the scheme Andrew Mahon said that it is vital it goes ahead.

“I think it is absolutely imperative,” he said. “If a person in every household keeps an eye out — then if they see anything that looks suspicious or out of place it can be reported immediately. ”

According to Mr Mahon, while some areas already have the text alert system in place it hasn’t been set up formally yet across the board.

“It hasn’t been set up on a formal basis yet but in my area people keep a look out,” he said. “If people keep an eye out for what ever is going on around them then the neighbourhood is in a better position to keep an eye on criminal activity and give a lead to gardaí.”

Mary McEvoy also agreed that the scheme will be very important for the town.

“I saw the garda car go by the house recently,” she said. “Even just seeing the car going up and down is brilliant.”

Cllr Patricia Ryan said that she had campaigned in the past to get more garda presence in Monasterevin and for longer opening hours at the station.

“I found a lot of crime was carried out at night,” she said. “There are so many exit roads in and out of Monasterevin so a lot of traffic is coming down the motorway and lots of crimes are happening at 3 or 4am in the morning.”

She added that work on the text alert scheme has to come from the community — “that’s important as you can’t expect the gardaí to do everything,”she said.

Garda Harty said that people can still ring Monasterevin Garda Station when it is closed as the calls are automatically forwarded to Kildare station.

“If you see anything suspicious give us a ring,”she said.

“A lot of the time it is nothing, but if we can help at all then give us a ring. If Monasterevin is closed the calls will come into Kildare town garda station so you will always get someone, and it’s the same for Rathangan. And if it’s a bigger situation, call 999 first. Don’t be afraid to call.”

Gavin Dunphy, the Community Liaison garda, said that it is important people engage locally with the gardaí.

“As in any town it is about knowing who the local garda is and putting a face to a name,”he said.

“We are going back to a more traditional approach with gardaí on bike patrol. The car often acts as abarrier whereas when you are on the bike you can stop and talk to people, say hello — and we are happy for people to come up and say hello any time,” he said, adding “It also keeps us fit!”

A leaflet with simple steps to help homeowners to protect their homes was also handed out at the gathering, alongside a personal safety security handout for the older person.

The advice is simple: ‘If you love it, lock up and light up’. Crime prevention steps recommended include turning on lights, using a timer if you are out, locking all doors and windows, using an alarm and keeping keys away from doors and windows.

Older people are advised to keep in with their neighbours, as a connection to the community is a vital component in crime prevention and reducing the fear of crime. Neighbours are equally advised to check in on their elderly neighbours, keep an eye on their property and call regularly to make sure everything is OK.

Being a good neighbour is about awareness of what is happening around you and keeping a friendly lookout for the person near you.

For more information and for sign up forms for the text alert scheme in Monasterevin, contact Monasterevin garda station.