Doorstep issues include roads, St Paul's school and the 35 year wait for a councillor 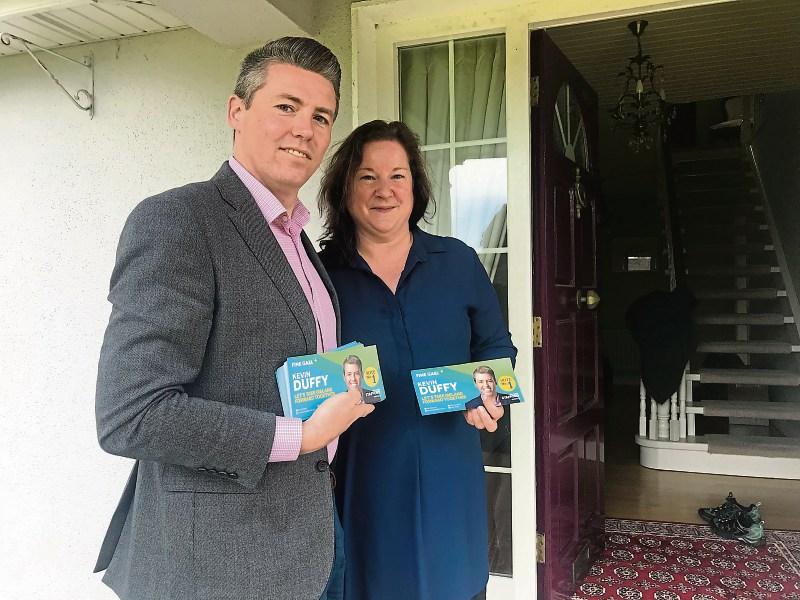 Monasterevin has not had a councillor for 35 years and Fine Gael newcomer Kevin Duffy is on a mission to change this.

In fact this is the mantra of the Monasterevin native on the canvas in Old Grange last Wednesday, May 15.

35 years 'is a life time' as Kevin tells one gentleman, while discussing the issues ahead of this year's local election next Friday.

The main issues surfacing on the doorsteps in this part of the town are the state of the roads and lack of footpaths, the delay in new school for St Paul's and the fact that Monasterevin has been overlooked in terms of local funding for years.

“It is about time Monasterevin had a councillor. The sooner we get a local councillor in the better. Sure 35 years, that's seven elections we've missed out on.”

As we go around the day is sunny and it seems to reflect in the demeanour of the people whose doors we are knocking on.
The welcomes are warm and spirits seem to be up - a bit like the turn in the economy since the last local election five years ago. Some know the candidate or at least know of him while one householder is new to the area.

There is a definite sense of local life improving.
“I've no issues except for that road there,” said one householder who informs us we got her on a good day as her son just got a job.
“It is an absolute disgrace - I drive a small car and I'm bouncing around the place on that road - it isn't fair and it is costing me in tyres.”

Kevin agrees that the local roads and lack of footpaths along them are an issue for the council.

It is discussed that another help would be to add more lighting to the area and to upgrade the 3km loop near there.
“These are all things that the council can do - it is in their remit,” explains Kevin.

“Monasterevin has had a lot of building but no amenities and there is still the issue with the new school.”

The conversation then turns to the high rates for businesses in the town and the number of vacant units as a result.

Kevin says that it's all about getting someone into council to join the dots, that there is funding for amenities there but 'we're just not connected to it.'

The next household reiterates the need for the new school and for Monasterevin to have a representative on Kildare County Council.

This house is giving Kevin their vote and Kevin, who laughs easily and still speaks with a lilt from his ten year stint in Australia, confirms that he is up for the challenge, although he admits that he is finding life 'very busy' of late'.

“The lord finds work for idle hands,” the man says with a laugh before adding that Kevin can 'count on us'.

It's not all plain sailing though and his party gets a thrashing at the doorstep from one householder nearby.

“I don't know you personally but the party you represent did a very bad job governing this country,” he said.

“There is no heart to this town,” the householder adds.

“No focal point except for the supermarket - maybe it is because people are out working all day. That's how it seems to me but I'm not long here myself and I don't yet have the vote here.”

Kevin agrees that the town could use a heart or a focal point and interjects that he wants to change this and hands over his flyer before we take our leave.

“If we want to get things fixed in Monasterevin then we do need representation,” he says to me as we walk away.

“People recognise that fact even if they have a problem with the party its not with the individual,” he assures me, undeterred and seemingly ready for the election battle up ahead.

SEE ALSO:Good turn out for Monasterevin meet the candidate night