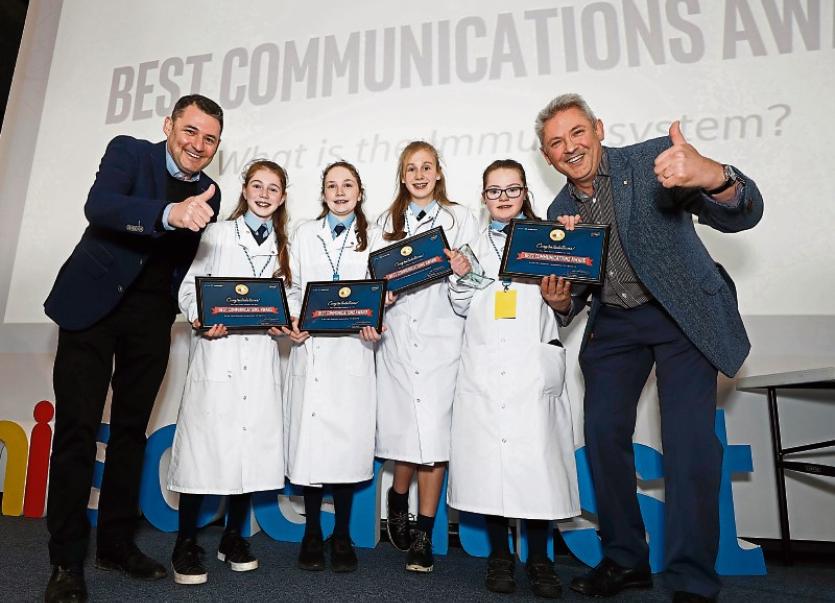 Straffan National School students picked up Best Communication award for their 'What is the immune system' project in the Intel Mini Scientist Grand Final, which took place on Monday, March 4, 2019.

The Intel Mini Scientist, which is now in its 12th year, gives primary school students from 4th, 5th and 6th class, the chance to explore science through project based learning and exhibitions.

At the grand final, which was held in the Aula Maxima at Maynooth University, the participants exhibited their projects for a panel of judges, which was made up from Intel employees who each had the difficult task of choosing the winning projects from the very creative variety. Each of the projects included visual displays, projects books and practical experiments based on a scientific area aligned with the national primary science curriculum.

The first phase of the program involves students participating at local level exhibitions where Intel judges visit the participating schools, choosing two winning projects in each. The second phase saw each of these winning projects take part in the Mini Scientist Regional Finals which were hosted throughout December in Leixlip and Shannon.

The 2018 / 2019 initiative was described as another exciting year for the Mini Scientist competition with almost 8,000 students from 120 schools in 18 counties across Ireland taking part in the Grand Final event. This year there were almost 2,500 projects exhibited as part of the Mini Scientist competition and the Grand Final brought together the top 23 projects from across the country.

The Grand Final was filled with innovative and imaginative projects, put together through months of hard work and the judges praised all entrants.