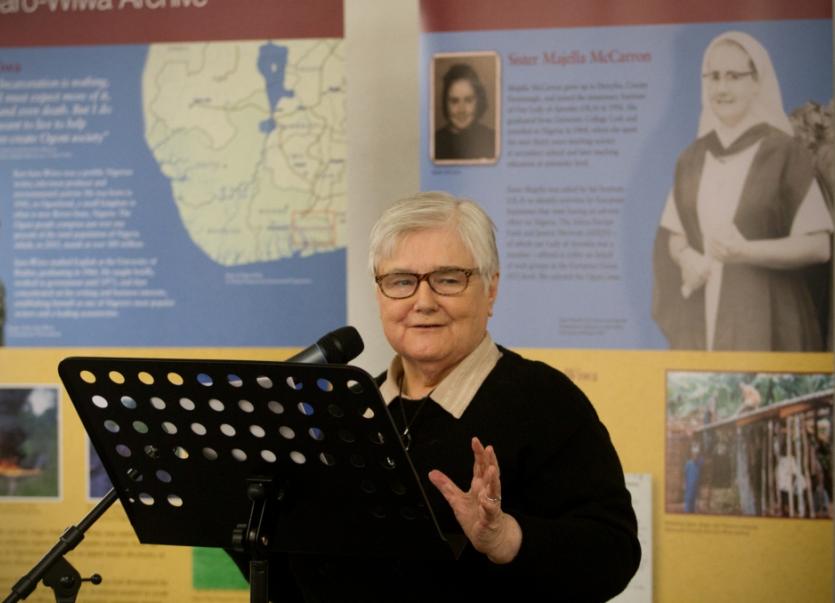 The exhibition is a result of collaboration between Maynooth University Library and Kildare County Council Library Services.

Councillor Power welcomed the collaboration and thanked Sister Majella McCarron (OLA) for her involvement in the project and for making the journey to Athy.

The letters, now held in Maynooth University library, were smuggled out of military detention in breadbaskets. This exhibition features a number of letters and poems written by Ken Saro-Wiwa and photographs and panels telling the story of Ken Saro-Wiwa and the Ogoni issues.

Helen Fallon, Deputy Librarian at Maynooth University spoke of the content of some of the letters and how the title “Ringing the Ogoni Bells” came about. She welcomed the opportunity for Maynooth Unversity to collaborate with Kildare Library Services.

Sister Majella was the final speaker on the evening and she recounted to the audience her involvement in telling the Ogoni story which dates back more than 20 years.

The exhibition runs in Athy Community Library until 2 March and it is envisaged that the exhibition will travel to a number of public libraries in Ireland, thus bringing the work of Ken Saro-Wiwa to a wide audience.