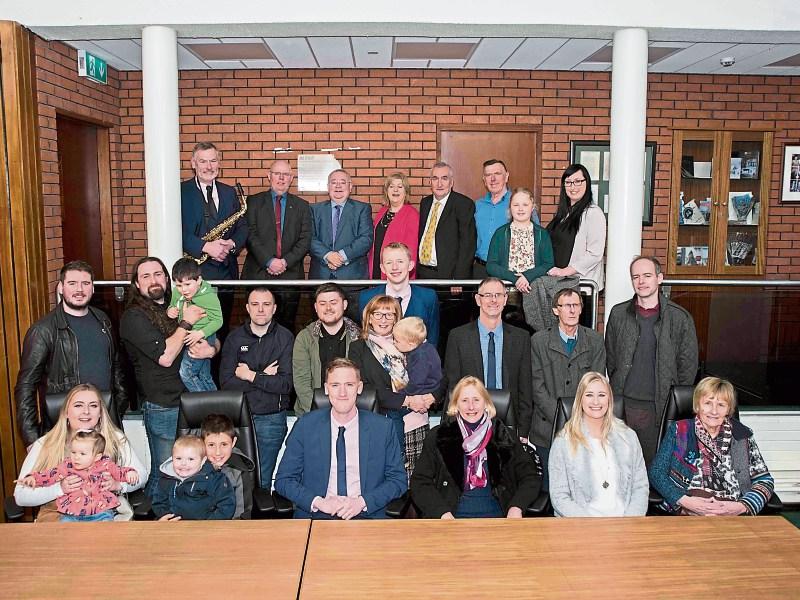 CC Sean O'Fearghail with Cllr Aoife Breslin, Colm Walsh founder of Made of Athy, members of the O'Neill family at the unveiling of the plaque

A further 16 plaques will be unveiled after Christmas in the Made of Athy initiative, which was the brain child of local man Colm Walsh.

Local musician, the late Joe O'Neill, was honored quite recently at the Athy Municipal District Office, which was also attended by his family, local councillors, Colm Walsh and Ceann Comhairle Sean O’Fearghail.

Joe was described as a band leader who had his own orchestra in the 50's and toured throughout the UK. His son Kevin played Stardust, which was both the name of the orchestra, and his favourite song.

Next in line for the honour is Mani, formerly of the Stone Roses and Primal Scream who will unveil his plaque this Saturday in Emily Square at 3pm.

Last Friday, Johnny Marr from the eighties band the Smiths, unveiled his plaque to great acclaim and fanfare. Johnny’s parents came from Athy and his mother grew up a few doors down from Mani’s mother.

Meanwhile organisers are seeking suggestions from the public to avoid overlooking any musical individual with a connection to Athy.