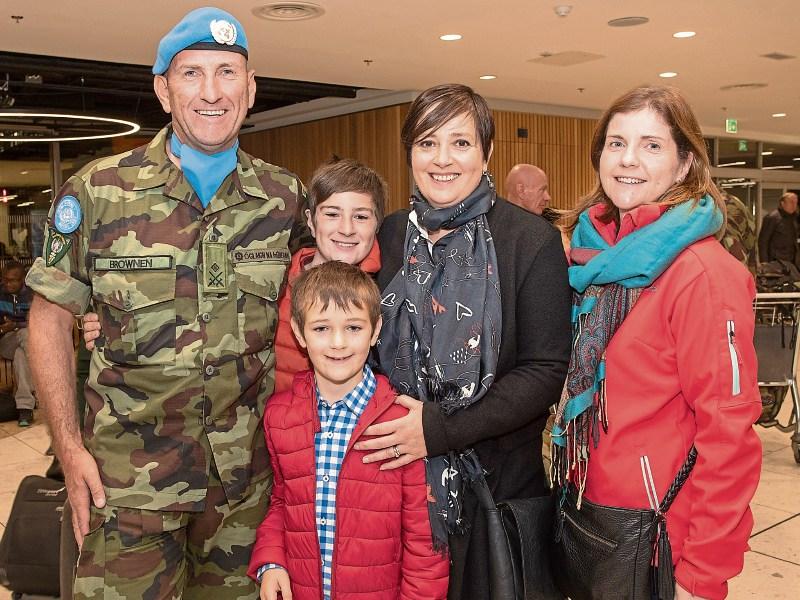 There was a big welcome home for the 119 Irish troops from the 57th Infantry Group, United Nations Disengagement Observer Force (UNDOF) who arrived in this morning two weeks later than planned following a six month deployment to the Golan Heights and Syria.

The personnel, six of whom are from Kildare were met by their families and friends at Dublin Airport.

The troops were serving with the UN on the Golan Heights and Syria and were due to return home on Monday, October 1 however there was an issue in relation to their diplomatic clearance. They had to stay on longer than planned in Camp Faouar in Syria. All troops were given an €1,000 ex gratia payment in recognition of the disruption caused to them and their families.

The 57th Infantry Group were drawn primarily from the 3rd Infantry Battalion, stationed in Stephens Barracks, Kilkenny, but also contained personnel drawn from all over the country including Kildare.

The 57th Infantry Group were the first Irish unit to redeploy to Syria following a UN evacuation of personnel in 2014.

Their replacements, the 58th Infantry Group, have completed their deployment to Syria and have joined their UNDOF colleagues in theatre.