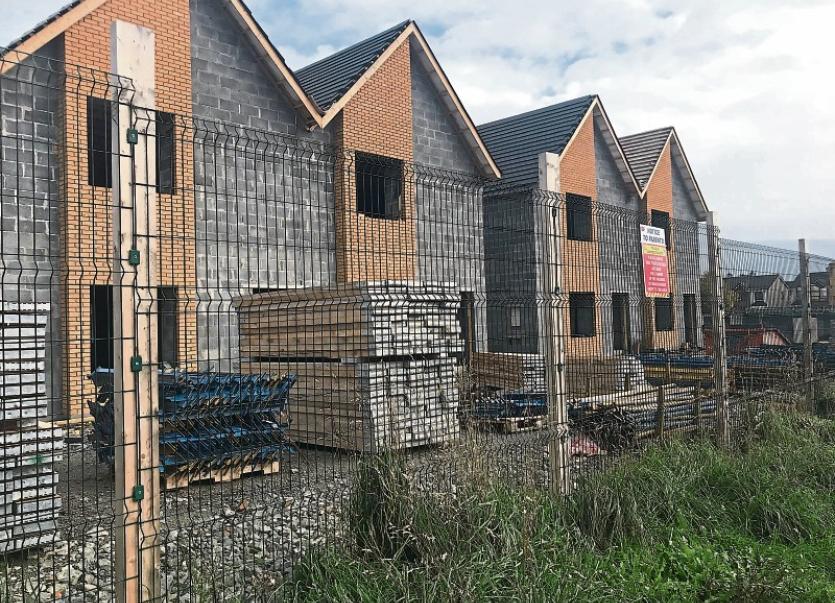 Dunmurry Rise pictured from the back

A fence surrounds the site of 32 new social homes for Kildare town and there is no access in or out at the Bishopland’s newest housing development.

There are no signs of life attached to the usual hussle and bustle of a building site since work suddenly stopped amid financial concerns at Dunmurry Rise three weeks ago.

All that remains are the parially constructed 13 houses out of 32 that were to be built for Kildare County Council by MDY Construction Ltd.

Walking around the perimeter of the estate it is clear that great progress had been made on the estate since the council signed the contracts last March.

Some of the houses even look like they are almost finished. Most have roofs on, while some even have the windows and doors in.

They comprise of a mix of one, two and three-bedroom social houses.

WATCH: A total of 13 social houses are near completion at the now defunct Dunmurry Rise in Kildare town pic.twitter.com/bmwY1mCqaa

One house however is still at the foundation stage. It will have a granny flat to one side to accomodate the Delahunt family, namely Kenny (23), who is a wheelchair user.

“Here is where my house will be,” said mum Mary, who will share the house with her two other children Sophia (19) and Fionn (14), once it is finished. She points from behind the fence to some foundations in the soil and explains that she has the plans for her house at home.

“It is sad to see – we still haven’t heard anything from Kildare County Council.  We were told we would be in by March – hopefully we will be in soon. I just want my house. My house will be a two storey with a one bed room flat attached to it for Kenny. It is very worrying not knowing what is going to happen now.”

The family are currently living in council house but it is unsuitable for their needs.According to Mary she has to sleep in the sitting room as there is no room.

“I have to sleep in the sitting room because there is not enough room,” she said.

Kildare County Council and MDY Construction of Staplestown, Naas, signed a contract for the construction of 32 new homes in Dunmurry on March 9 last.

JRS Scaffolding was subcontracted to build the 32 houses at Dunmurry Rise in Bishopsland, Kildare town, but cited fears recently that they won’t get paid for their work and began removing their equipment from the site.

Kildare County Council in a media statement said the contract for the construction of social housing in Kildare town was awarded to MDY Construction following completion of a public procurement tender process.

“Following a petition to the court by the company, an examiner to the company has been appointed.

“Kildare County Council will work to ensure that delays to construction of homes are minimised, and that on-site activities resume at the earliest opportunity,” it stated.