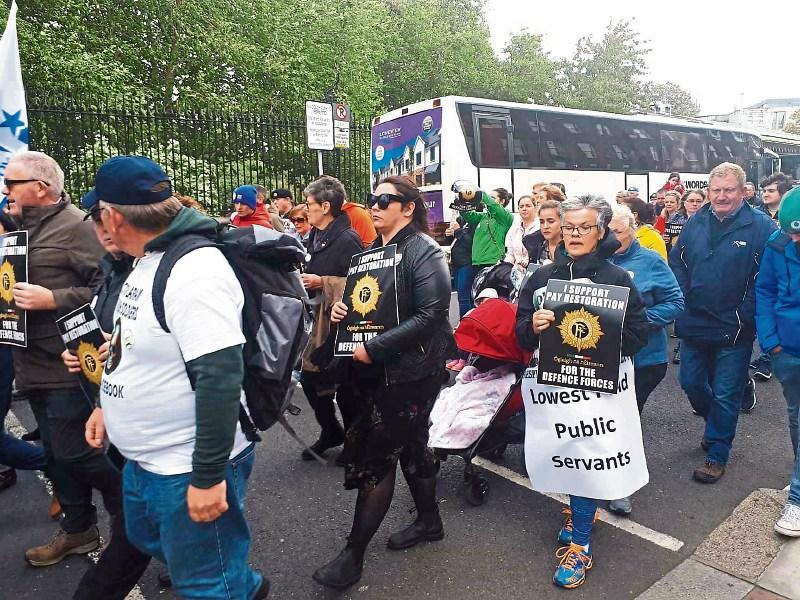 Kildare families of members of the Defence Forces, who recently took to the streets to demand better pay, say that there is no incentive for members to stay.
In this special report, two Kildare army families, who prefer not to give their names, describe their experience of trying to make ends meet and keep a roof over their heads.
They claim that the Defence Forces is in crisis, coping with poor pay, declining training standards with increasing levels of people seeking to leave.

“Our families live in poverty, we suffer from food, income, fuel and child poverty,” said spokesperson Sarah Walshe, who lives in Newbridge.
“It is the new members mostly affected, on ‘yellow pack contracts’ and low pay, and they have to go after 21 years.
While members of the Defence Forces, through their Representative Associations, PDFORRA and RACO, have recently accepted the provisions of the Public Service Pay Agreements and increases in pay have been made accordingly, these do not go far enough, according to Ms Walshe.
“It is breadcrumbs what they are getting, ” she added.
“They are in dire straits and they can’t say no, and some of the allowances that were cut do not come under the Landsdowne Road agreement.”
In response, the Minister for Defence Paul Kehoe TD said the Government has requested the Public Service Pay Commission to examine issues of recruitment and retention in the Defence Forces. “We are in a process of restoring pay and reversing the cuts that were introduced across the public service during the economic downturn,” he said in a statement to the Leader.
“There are over 1,000 solders in the Curragh and most of them can’t afford the rent rises in Newbridge and areas around the Camp.”

A newly-wed Curragh- based soldier, along with his wife and children. are facing the threat of homelessness due to high rental prices in Kildare.

The couple, in their mid-twenties, have two young children, and both work full-time. The private at the Curragh also worked as a bar-man, until recently. His wife is a shop supervisor. They have been forced to share a house with relatives, sharing the €1,300 per month rent

The soldier and his wife have been paying €700 per month. However, the people that they have been sharing rent with have had to move in order to get closer to new employment.

Unable to get a mortgage, due to lack of savings, they claim that they are now facing a real threat of homelessness.They are €200 over the threshold for Housing Assistance Payment, while childcare is costing the couple an average of €320 per month.

The soldier’s wife, who does not wish to be named said:“I can work anytime from 7am to 11pm.

“I can go a full week without seeing my children go to bed. “We don’t want handouts, we feel that we are being penalised for working.

“We just want somewhere to live that is affordable, that is not putting us in debt.”

The couple are being met by a minimum rent of €1,000 per month for a two bedroom property.She added that landlords are reluctant to rent properties to couples with children.

“We are going through a really bad time at the moment.”

A recent media statement from the Defence Force families organisation said that they are working hard, but they claim they are earning less and less so cannot make ends meet.

“In our current economy, we see many Defence Force personnel working more than one job and are still unable to make ends meet.

“Why? Certainly not because they haven’t worked hard enough.”

"My husband and I have been married for 7 years. We have four children, two in primary school, one in preschool and a 9 month old baby.
I was working full time until after my maternity leave when he was deployed overseas. My husband is serving a back-to-back trip overseas (12 months) so we can pay for rent, food, clothing and anything else we might need.
He is missing out on our children’s milestones and just having a cuddle with them. The children miss him and I miss him terrible. I am alone with four young children and we have to rent in an area that is cheaper than around the Curragh Camp as it’s very expensive.
I don’t drive and my family are not in the same town as me either.
Owning our own home is a dream we once had. Even though he is overseas making money, with all the usual bills i.e. gas electricity, rent etc, I doubt we will ever have enough for a deposit and get a mortgage that would be enough to buy a home.
It is a struggle most days but we try our best and just take it day by day. We were on the council list and last October we were taken off it because we earned too much as a couple. I’m trying to get back on the list but not being entertained as my husband is earning too much overseas.
I often wonder would we be better off if we didn't work. We are damned if we do and damned if we don’t.
It breaks my heart to think of all that he has missed in our children’s lives and that my children don’t have the luxury of having a dad to tuck them in at night and give them a goodnight kiss.
This is not a life, it’s an existence."