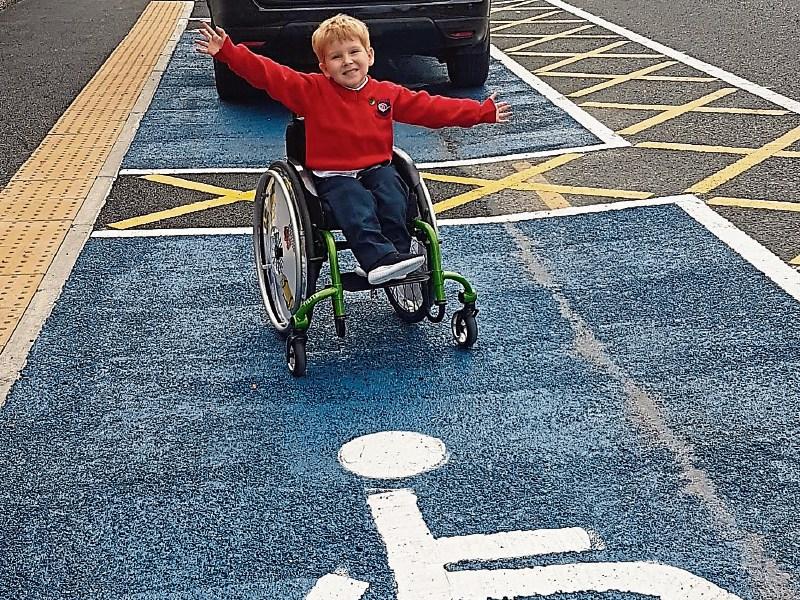 Lisa Brett, mum to Eddie (6), is urging people to leave the two disabled parking bays at her son’s national school in Monasterevin free at school drop off and pick up times.

Lisa, alongside the Parents Council at St Evin’s National School and Cllrs Mark Wall and Thomas Redmond campaigned last year for the council to install the two parking bays for Eddie and another pupil at the school.

The bays were finally put in earlier this month but on Eddie’s first day back, yesterday, the two spaces were taken up.

Eddie, who attends St Evin’s national school on Drogheda Street, is in senior infants and he is a wheelchair user.

“Yesterday the disabled spaces were full when we arrived to drop off Eddie at school,” said Lisa.

“We began this campaign for the spaces last October and eventually in August they were put in place. We arrived to drop Eddie off at school around 9am and found two cars parked up in the spaces. One was unoccupied and the other was occupied.”

According to Lisa while both cars did have their wheelchair stickers displayed but neither were carrying wheelchair users that day. She is not disputing their need to use the space but rather the time that they were using it.

“They may have needed to park there but one was misusing the wheelchair badge by sitting in the car while parked in the space - that is actually not allowed,” she added.

Lisa explained that the two people who parked in the spaces were unaware of the situation and have since agreed to leave the spaces free at school drop off and pick up times.

It later transpired that one of the occupants was Micheal Kinsella who has a disability badge for three types of cancer and is currently undergoing chemo says he has no problem with leaving the space free for Eddie at those specific times. He disputed that was misusing his badge because he had just had chemo and had no energy to walk that day.

"I get chemo twice a day and I had no energy that morning as I was only after getting chemo," he explained.

"I can do a small bit of walking but I wasn't able to do any that morning. I drop my partner's child to school most days and then I go back to bed."

Lisa said she is grateful for everyone's co-operation where Eddie is concerned.

“We only need it twice a day at 9 am and again at 2 pm. I am not reserving the space but because we campaigned so hard for the boys and if it wasn’t for the boys these spaces wouldn’t even be here at all. I am just looking for some common sense and consideration – these spaces were hard won and when the horrible weather comes it will be terrible if we can’t use them.Trying to get the wheelchair out and dry in the horrible weather is hard enough.”

Lisa added that she will have to start campaigning again for disabled parking spaces at the nearby St Peter and Paul’s national school where Eddie will attend from 2019 on wards for six years.

“We have to start the same fight again,” she added. “There are no disabled parking bays there and Eddie will be going next year. It is a constant battle and we never stop. I am just grateful for everyone’s co-operation in this regard.”