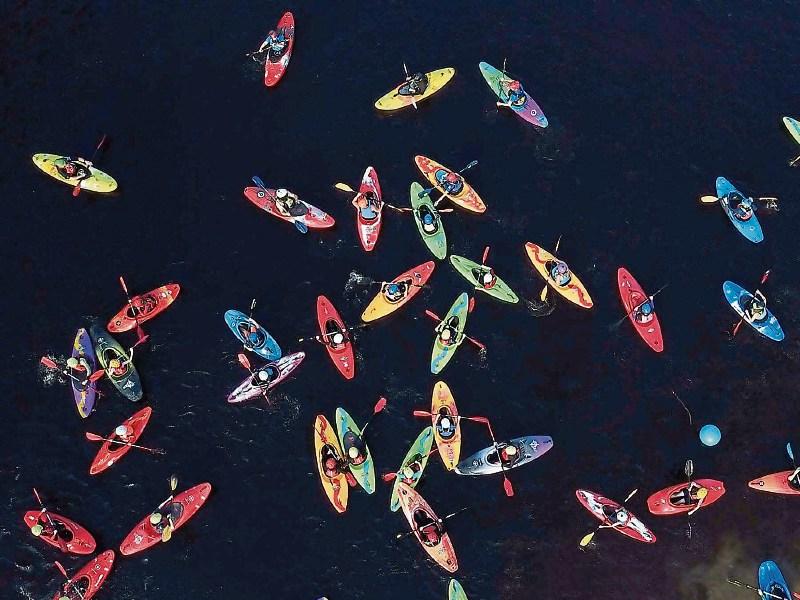 Forty six kayakers from the two West Wicklow Clubs joined together on Wednesday for an evening of games, craic and a BBQ taking full advantage of the glorious weather.

Both are small clubs but kayaking is growing in popularity all across Ireland.

Orlagh Deegan, secretary of Lacken Kayak Club has been involved in the sport for over 10 years and extended the invite to Balinglass Kayak Club to join them at their base in Russelstown Bay near Blessington. Chris O’Loan who heads up Balto Kayak Club quickly snapped up the offer and very quickly parents from both clubs came on board and a full blown catering team was formed. Both Orlagh and Chris agreed that the parents played a blinder but would love to see more of them on the water.

Orlagh said “it's great to see so many enjoying the water safely during the heat-wave and there was a carnival atmosphere here tonight, we loved hosting our neighbouring club”. Chris added “we had a fantastic night on the water, it’s a fantastic sport bringing people together to enjoy the outdoors and we’ll certainly be returning the favour and hosting the Lacken crew on the River Slaney in Baltinglass”.

On the night Martin Blake from Bailey and Blake Video productions came along to capture some of the action and commented that “it was great to see so many happy faces while editing the footage of the kayakers”. Martin is currently working on ‘The River Liffey Stories’ project, a collaboration between County Wicklow and County Kildare Heritage Departments.

The project explores fascinating stories and information about the River Liffey from Source in the majestic Wicklow Mountains as it meanders through towns and villages in Wicklow and Kildare before reaching the sea in Dublin. This journey explores the history, geology, flora and fauna and the people of the river both historic and present day. Martin hopes that South Dublin, Fingal and Dublin City will join the initiative.