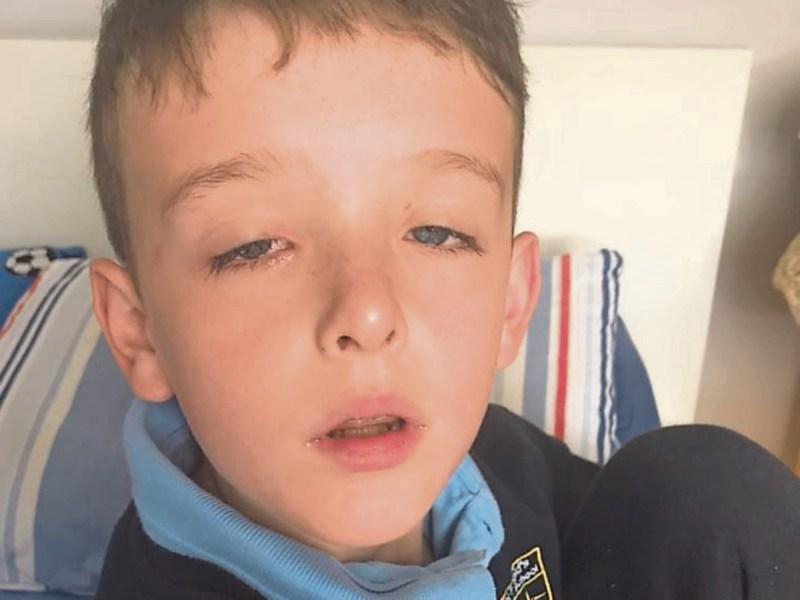 A Kildare town mum of two whose son was having difficultly breathing due to adverse hay fever was told the earliest appointment she could get would be in two and a half weeks time at the local medical centre.

“I can’t believe that you can’t get to see a doctor on the day in Kildare town. My son Ben (8) was clearly in need of an antihistamine that we could not get over the counter — the pharmacist could not give it to him without a prescription — his eyes were swollen and he was having difficulty breathing. I knew what was wrong but I couldn’t get a doctor, said Nicola Benson.

Her two children, Lily (11) and Ben (8) suffer badly with hay fever each year. However, this year and last week in particular has been extremely bad for them. “Unfortunately, nothing over the counter is working anymore,” she said.

On the morning of June 12, Ben woke up and had difficulty breathing, his eyes were completely stuck together, he had swollen eye sockets and a bloody nose.

“He was crying uncontrollably with the pain from the burning sensation in his eyes and was coughing a lot due to the pollen on his chest. I brought him up to the Kildare Medical Centre straight away but was told that there were no appointments to see a doctor in the centre for at least 2.5 weeks.”

She added that K-Doc were taking the overflow for the Kildare Medical Centre but due to the overflow she could not get an appointment there either.

Nicola said that she explained that Ben badly needed a prescription for a steroid antihistamine, and if she could have the prescription she would follow up with a GP appointment at a later date when they had one available.

However clinic policy meant that Ben would have to see a doctor before he could have a prescription.

“I had to find another GP in Naas that knew nothing of my sons’ medical history or had any access to his medical records, to see him and he was immediately prescribed steroids and he was put on an inhaler straight away.”

According to Nicola there were only two doctors working in the Medical Centre that day . She said for the size of Kildare town and the the new estates being developed more GP's are needed.

In response the HSE said that while they cannot comment on individual cases, Kildare Medical Practice has confirmed to the HSE that all emergencies for patients are seen on the day in the practice. A triage service is available to assist in determining the degree of urgency. For routine appointments the wait time is approximately one week.

The HSE has also been advised by the practice that they utilise the services of K-Clinic in Naas. This is a clinic operating in Naas that GP’s who are members of the Out of Hours K-Doc Service can send their patients to during the day time to cope with any overflow of demands of patients to see a GP on the day. It adds that the HSE Community Healthcare Organisation Dublin South and Kildare West Wicklow is committed to analysing the capacity of GP’s across the area to meet demand.

It is anticipated that this analysis will begin before the end of 2018.