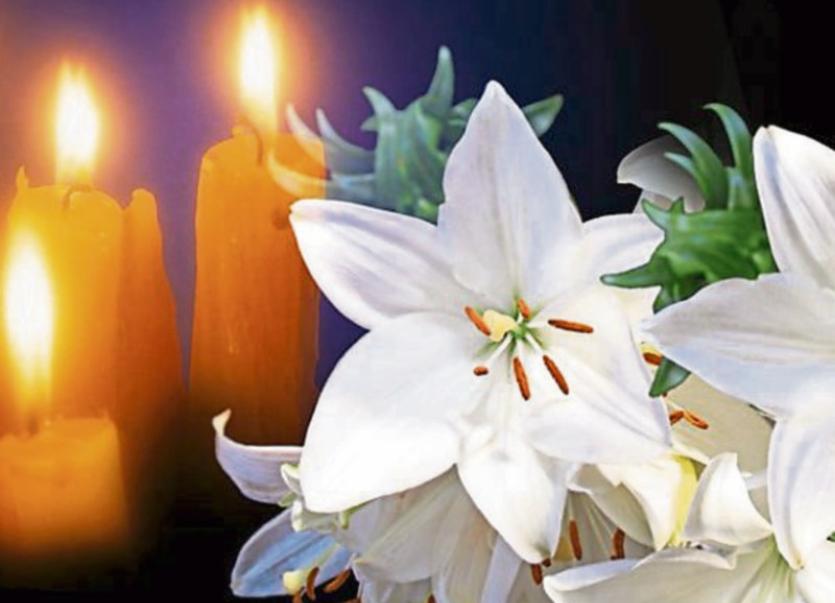 The death has occurred of Jim The Gilly COLLINS

Collins Jim, The Gilly, Millstone House, Kilcullen, Co. Kildare, June 3rd 2018, at The Beacon Hospital, surrounded by his family. Sadly missed by his loving wife and best friend Nuala, his adored daughters Deirdre, Maeve and Fiona, their partners Conor, Ben and James, his much treasured granddaughters, Ellie, Grace, Lucy and Alice and his dearest brother John.

Reposing at home from 5pm to 8pm Monday, June 4th. Funeral Mass at The Church of The Sacred Heart and St. Brigid, Kilcullen, at 1pm on Tuesday, June 5th. Burial afterwards in St. Brigid's Cemetery, Kilcullen. House private on Tuesday morning, please. Family flowers only. Donations in Jim's memory can be made to Support The Valley Park, Kilcullen. Donation box in church.

May Jim Rest In Peace

Reposing at Cunningham’s Funeral Home, Lucan on Monday evening from 6.00 o’c to 8.00 o’c. Removal to the Church of St. Charles Borromeo, Confey, Leixlip on Tuesday morning arriving for Requiem Mass at 11.00 o’c followed by burial in Confey Cemetery. Family flowers only, please. Donations if desired to St. Francis Hospice, Blanchardstown.

May he Rest in Peace

Reposing at Clarke’s Funeral Home, Burgage More, Blessington on Monday from 1 o’c to 7 o’c, with prayers at 7 o’c. Removal on Tuesday morning to the Church of the Immaculate Conception, Ballymore Eustace arriving for 12.00 noon Funeral Mass followed by burial in St. Mary’s Cemetery. Family flowers only please. Donations if desired to Cancer Research. Donations boxes at the church.

Reposing at Anderson and Leahy's Funeral Home, Henry Street, Newbridge from 4pm on Monday with prayers at 7.30pm. Removal on Tuesday morning at 10.15am to arrive at St. Conleth's Parish Church for 11am Funeral Mass. Funeral after Mass to St. Conleth's Cemetery.

Removal on Wednesday, 6th June, 2018 to The Church of The Immaculate Conception, Rathfeigh, arriving for Requiem Mass at 12 noon with burial afterwards in the adjoining cemetery. House private please.

Peacefully, surrounded by his loving family, in the care of the staff of Beechpark Nursing Home, Kildare.

Reposing at The George Mullins' Funeral Home, Kilcullen Road, Naas, on Monday from 5pm with Prayers at 7pm. Removal on Tuesday morning at 9.20am arriving at the Church of Our Lady and St. David, Naas for Funeral Mass at 10am followed by burial in St. Corban's Cemetery, Naas.

"May He Rest In Peace"