Music, ministers and flags at the opening of Gael Scoil Mhic Aodha in Kildare town 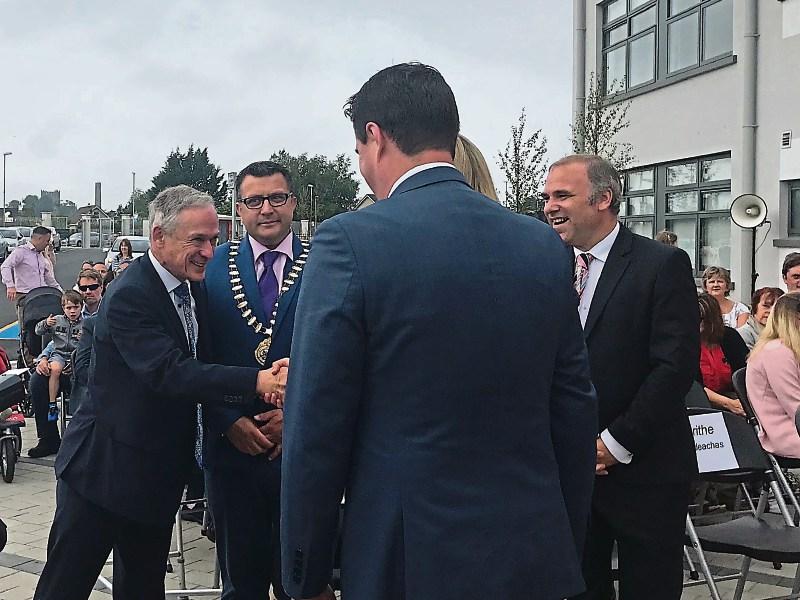 The rain held off this morning in Kildare town for the official opening of the new Gael Scoil Mhic Aodha by the Minister for Education Richard Bruton TD.

The Army band played a rendition of Beauty and the Beast as the Minister arrived to open the new two storey primary school building with eight classrooms.

The Band played at the opening as a fitting tribute since the permanent building is located in the former Magee Barracks site.

Also in attendance were TD’s Fiona O’Loughlin, Martin Heydon, Mayor of Kildare Martin Miley and Cllrs Mark Stafford and Suzanne Doyle along side partents, members of the Board of Management and the pupils of the school.

Over €4m was invested by the Government to provide these new state of the art facilities for Gaelscoil Mhic Aodha. The total capital spend in the Kildare region alone on school buildings is over €200m in the last seven years.

Speaking at the official opening at Gaelscoil Mhic Aodha, Minister Bruton said, “I am delighted to be here at Gaelscoil Mhic Aodha today to mark the opening of these fantastic new facilities. We are investing hundreds of millions of euros into building and equipping schools so that we will have one of the best education and training systems in Europe. Since 2011, the capital investment in the school sector amounts to over €3.1billion.”

Those in attendance heard from Norma Ní Chonchúir, principal of Gaelscoil Mhic Aodha about how the school progressed from idea stage to the new building in just six years. She spoke of the importance of the Irish language in our culture and to the children who attend the school. And thanked all involved who helped to get the school to where it is today. She also said how lovely it is to hear the children play in Irish without even having to think about it.

The junior pupils, who were described as the real VIP's,  then treated all in attendance to a song as gaelige to welcome them and mark the important day.

The school was also awarded our first Green Flag on Wednesday 23 May and the flag was then raised to mark the day.