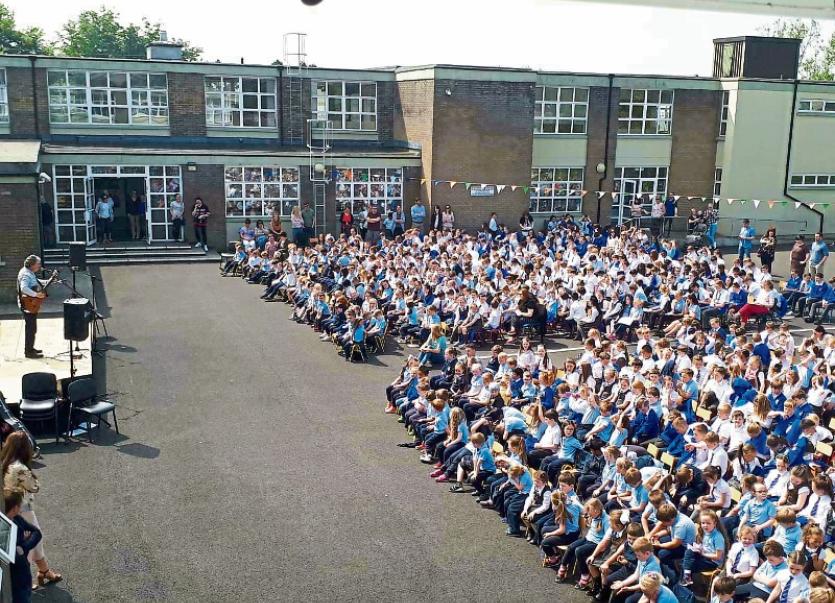 The pupils of St Brigid's Primary School, Kildare town, have been busy preparing in anticipation of the visit of a well known traditional Irish musician, John Spillane, who came to sing at the school on Monday, May 28.

The whole school of 1,000 pupils took part in the concert to celebrate Irish culture.

Songs such as Baidín Fheilimí, Trasna na Tonnta and Beidh Aonach Amárachcould be heard in the run up to the concert through out the school corridors last week.

“It included singing, Irish dancing, a tin whistle performance and of course a display from our distinguished school band,” said teacher
Elbihe Burke in adv

“The main guest was John Spillane, sang a variety of his songs which the children have been learning.

“Classes performed on the tin whistle and Irish dancing,” she said.

It was a whole school event of 1,000 pupils celebrating Irish culture.

The acclaimed singer songwriter John Spillane, whose career spans over 35 years within the world of music, has taken the time out of his busy career to participate in a number of local school events, often writing a new song for the school to sing with the pupils.

His songs have been covered by many Irish folk lumineer’s such as Christy Moore, Sean Keane, Karan Casey, and Mary Black,