Rebellion re-enactment all set for Monasterevin 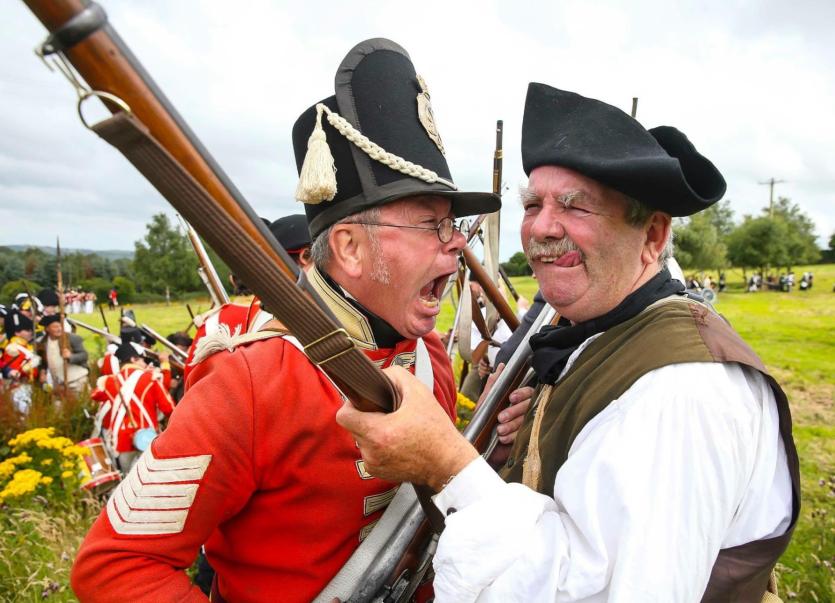 A two day rebellion will take place in Monasterevin to mark the 220th anniversary of the Irish Rebellion of 1798 and the town's role in those historic events next May 19 and 20.

On Saturday, May 19 there will be a living history garden from 2pm to 5pm at the Garden of Monasterevin House on main street.

Organisers are asking participants to come and join the redcoats and rebels with their colourful uniforms and weapons.

There will be lots to see and do with a historic camp and stalls from the People's Market. This will be followed by a history walk at 3pm. Starting from Monasterevin House and visiting the battlefield local historian Barry Walsh will lead a short history walk suitable for all ages.

On the hour, every hour from 2pm to 5pm the cannon will fire across the River Barrow.

On Sunday, May 20 there will be a parade starting at the West End featuring Sir Henry Ingelsby's fife and drum band. This will be followed by a wreath laying and flag raising at 2.45pm followed by a minutes silence at the site of the Battle of Monasterevin at the Fire-station

A second wreath will be laid at the Fr. Edward Prendergast Monument.

The Battle re-enactment will take place at 3.30pm featuring Redcoats and rebels fighting it out for the town of Monasterevin at the wild flower garden beside the Fire-station.

According to organisers Lord Edward's Own Re-enactment Group in the summer of 1798 as chaotic rebellion broke out across the country rebels from the surrounding countryside marched on Monasterevin and its small garrison of Yeomen infantry and cavalry.

In a bloody dawn battle the loyal defenders of the town drove off the United Irish rebels who retreated into the surrounding bogs. Monasterevin was the only town in Kildare to successfully resist the rebel forces. Crown Forces used Monasterevin as a jumping off point to retake the rest of Kildare from the United Irishmen.

Later a curate of the parish, Fr. Edward Prendergast, was hanged in the garden of Monasterevin House in order to pacify the local population, but in defiance they mounted a daring raid to retrieve his body and give him a Christian burial.

“With such a rich history connected to the 1798 Rebellion, it's important that we mark our town's place in history” says Barry Walsh local historian and member of Monasterevin's re-enactment group; Lord Edward's Own. “There will be fun for all ages in the Garden of Monasterevin House on the Saturday. The redcoats and rebels will be camping under the trees, while stalls from the People's Market will sell all manner of things. Every hour the cannon will fire and I will lead a history walk to the site of the Battle of Monasterevin. We want the whole community to get involved so why not dress up in 18th Century costume?”.

On Sunday the sights and sounds of battle will be heard at 3:30pm as the redcoats and rebels fight it out on the banks of the River Barrow using replicas of the weapons of the period. Before the re-enactment a ceremony to remember all those who took part in and died two hundred and twenty years ago will take place.

Monasterevin's Rebellion 220 will also kick-off a series of commemorative events for the 220th anniversary around the country with Prosperous, Enniscorthy and Killala following with their own events.