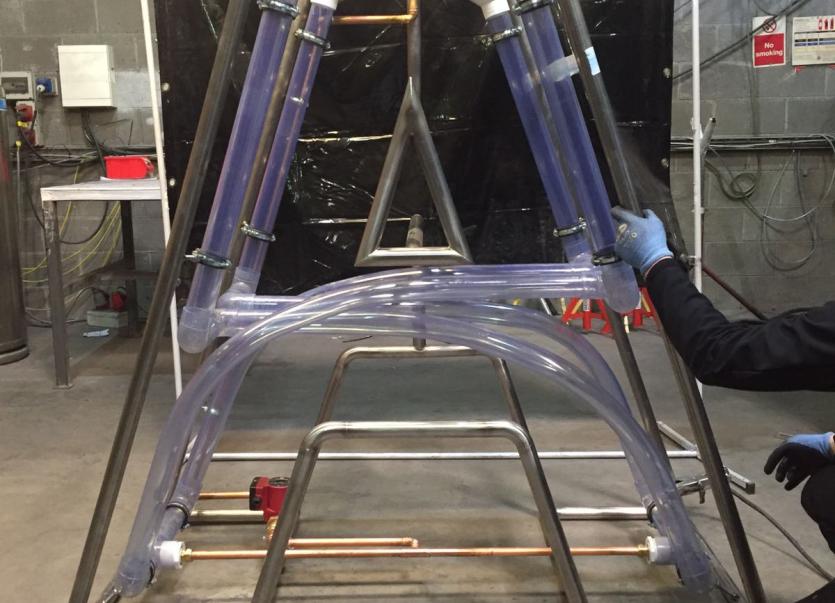 The six foot A letter

Kildare apprentices Aaron Cassells from Sallins and Ryan Doyle from Leixlip are two of seven apprentices who are part of an innovative national competition celebrating design, team-working and the problem-solving skills of Irish apprentices.

The competition, which is part of the Generation Apprenticeship campaign, involves teams of mechanical and electrical apprentices creating 6-foot, 3-dimensional A letters using a diverse range of design skills.

Entries to the competition use materials and techniques to design and construct the 3-dimensional As including a range of moving parts, electronics, wood, metal, stone, piping, water and electrical circuits. In the commis chef apprentices’ entry they reflect on the colour and magic of their chosen careers. Each team is recording video diaries of their work over the coming weeks and posting updates on their progress via social media.

The team from Jones Engineering Group are building their six foot, three-dimensional interpretation of the Apprenticeship ‘A’ from materials they use on a daily basis. They decided on a bicycle generator. The bicycle is attached to an alternator from a car by means of a drive belt. This in turn is attached to a 12v battery which creates the power. When the bicycle is being pedalled, it charges up the battery.

“We decided on a bicycle generator because it was fun and will encourage those who can see the structure to ‘have a go’,” said a team spokesperson.

“As seven working class lads we know how powerful interaction can be, especially with things that seem complicated. This is very true for school children who might look at electrical, mechanical and plumbing as something that is beyond their capability. We hope they can see that the opposite is the case. They can have fun, create great things and have productive careers.”

The entries will be exhibited in the Arts Garden and interior of the National College of Ireland and will be open to viewing by the public from 9-30 April in the College. A gala awards ceremony will be held at the end of the exhibition to announce the winning entry which will become a permanent installation.