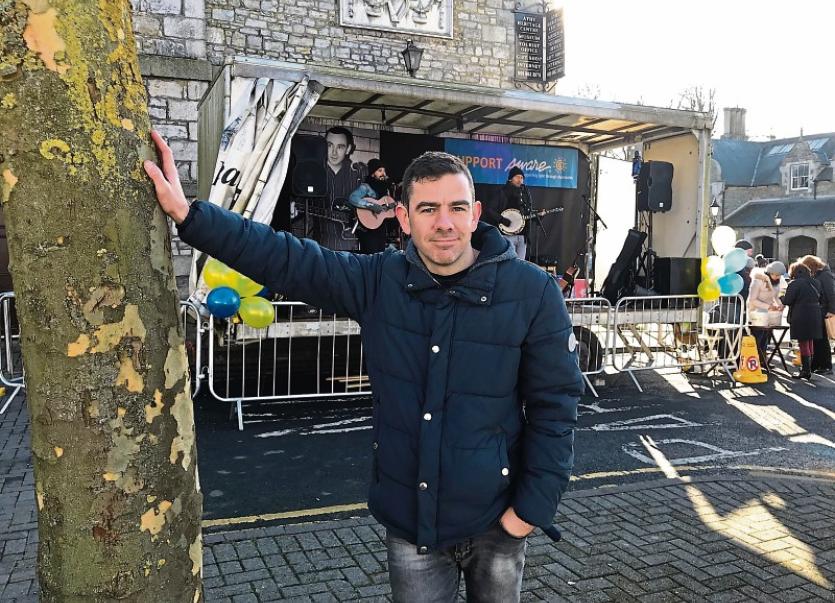 Niall Dunne the man behind the day long buskathon

The son shone for Athy musician Niall Dunne's day long buskathon, which took place in Athy last Friday in aid of Aware and in memory of his late brother Ray.

“The sun came out for us today - a ray of sunshine was what we asked for and that was what we got,”said Niall speaking to the Leader from Emily Square where the buskathon was still in full swing on Friday, February 9 last.

“We had high hopes and I think the sun has shone for Ray today.”

Local musician Niall Dunne is behind today’s Buskathon in Athy in memory of his late brother Ray pic.twitter.com/3ls3nAM4sl

Niall, who hails from the Carlow Road, is in a band called The Raglan Trail.

He wanted to do something special in memory of his brother Ray, who suffered from depression, and to raise awareness around the importance of mental health and talking.

Folk band The Finns were belting out the 'Queen of Camden Street' and the audience were giving it socks dancing on the spot and clapping in time to the music last Friday at lunch time, when the Leader arrived. Niall was worried that there were a few sound hiccups but he assured me 'it was getting there' with a number of bands lined up to play, including his own band. His wife-to-be, Gosia Gasior, is also in the band with him and the couple still call Athy their home despite touring and gigging around the country.

“Athy is home and we love it here. I think Ray would be really proud today and I think Aware is a great cause. We are rattling the buckets for Aware and hopefully removing the stigma around mental health issues and encouraging people, especially men not to be afraid to talk about things bothering them.”

Ray lost his battle with depression two years ago last week. Niall has created a funding page for Aware to shine a light on the what he says is the ‘darkness of mental health issues and those affected by it’.

READ MORE: A concert for Ray