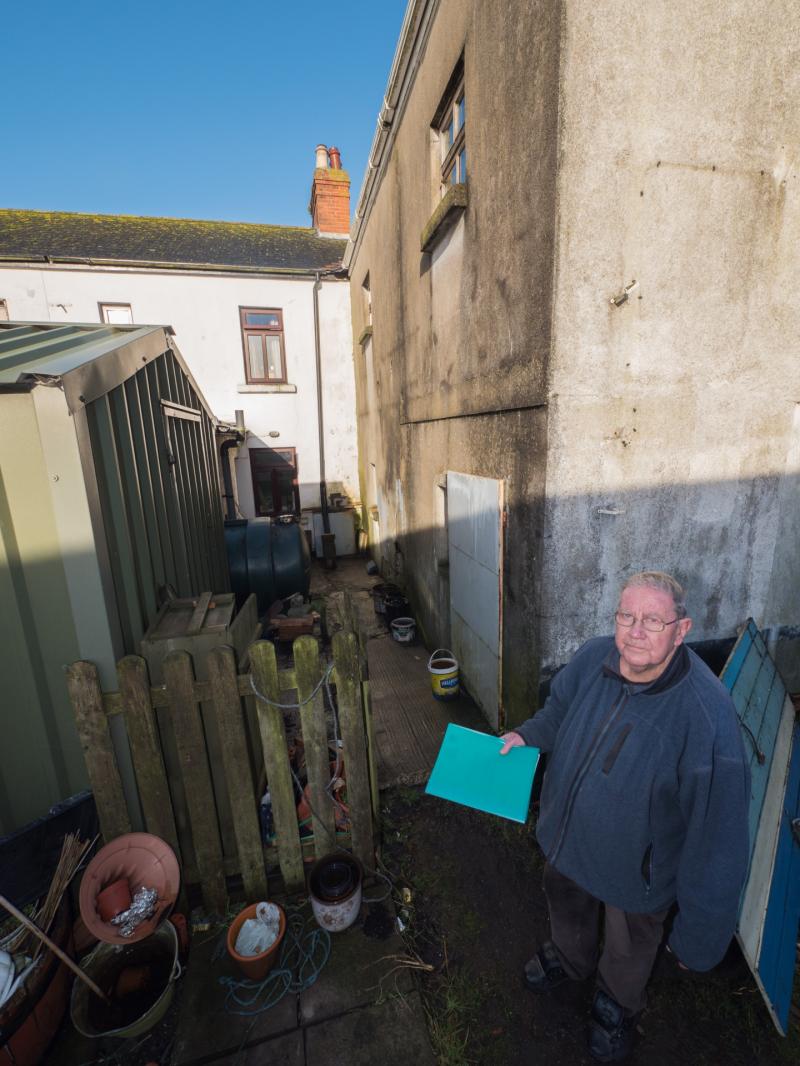 A 72-year-old Maddenstown man, who has been calling on the council to take down a derelict extension on the house next door for years, says he is now at the end of his tether.

Liam Lally lives at 2 Maddenstown Terrace and has been living next door to an unsightly extension for the past 18 years. The two storey extension, at 1 Maddenstown Terrace overlooks his back yard and downstairs loo. It was built on his adjoining wall and blocks the light from his kitchen.

“This was first built in 1999,” said Liam. “I put an objection in to the council on it. It is built on my dividing wall and there are four windows that look into my back yard. It also blocks the sun into my kitchen.”

Liam, who claims the extension was built without proper planning permission, had to block up his original bathroom window because he was over looked.

“I’ve been onto the council for the past 18 years over this. I have spoken to all my local councillors and TD’s who all made representations to the council on my behalf. I was promised the sun, moon and stars but nothing was ever done,” he said.

The extension, now derelict, has been lying empty for years, towers over Liam’s yard and back kitchen.

He was recently told by the council, in response to photographs he sent in, that the building was not derelict and that the file was closed.

The council later conceded that the building was derelict and unsightly but that “it would never be taken down.”

“I begged the council to come down here and have a look,” he said.

“No one has ever come. I have been in with them every year for the past 18 years and I have all the files to prove it.”

The extension was made into five flats at one point until it was deemed unsafe because there was only one exit.

“This is an unauthorised development built in 1999 — I objected to it at the time but nothing was done. The only place for it is on the ground.”

Liam, who has kidney problems was in hospital getting a transplant when the extension was originally built. “If I put my house up for sale and you came to view it, you would go like the clappers.”

In response, the council admitted that the property when inspected last October, did not fall within the ambit of the Derelict Sites Act.

It stated that a re-inspection was carried out on the property in January 2018 and it found that it had since deteriorated. Accordingly, a formal notice in accordance with the Derelict Sites Act is now being served which prescribes certain works which must be carried out.