Airline cancellation gave me a glimpse of Woodstock vibe

Paula Campbell explores Woodstock, home of the famous music festival, after her flight is cancelled 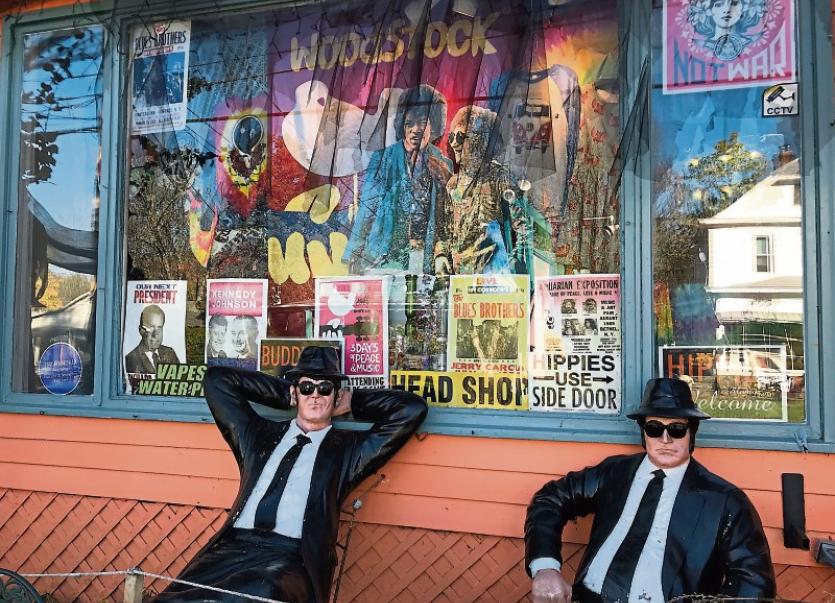 Outside one of the iconic shops in Woodstock

Woodstock in upstate New York is a grand place nestled in the Catskills mountains, well known for the iconic 1969 festival, and not the worst place to be when your flight gets cancelled a few hours before you’re due home.

I’ve missed two flights in my time, one due to a rail strike in Paris, and the other of my own making in Malta.

Both experiences, though nearly 20 years apart, are etched in my memory.

This time, however, it was a new, albeit familiar sense of complete helplessness as technical difficulties were cited as to why we were not going home.

The next available flight was in three days time, I was informed when I ring up Norwegian airline. The service was described as a 'no frills' flight to Stewart airport in New York state. I now see what they mean.

My travelling companion is my 10-year-old, who broke her big toe a week before our trip to see my sister for Hallowe'en. Conscious of the fact that we were both missing work and school due to the cancellation, it then dawned on me that we have a hospital follow up the morning we fly into Dublin.

But I was told we were lucky to be getting out at all this week, and to have a nice flight. It’s a strange feeling to be stranded in another country. We checked other airlines and get quotes as high as €4,000 for the one-way trip. Like I said — stranded.

Anyhow, we now had the chance to see a bit more of Woodstock and its surrounds before heading back to sleep on a couch in New Jersey for two nights.

Home to the original hippies, I noticed the pensioners there all seem to have a pep in their step.

They dress in jeans and waistcoats and have pink and blue hair. They seem to run the town and all the shops we went into.

My 10- year-old was naturally drawn to them and after each conversation, I felt compelled to ask “so were you there?”

The closest I get is one lady who runs an antiques and gift shop. She was only 15 at the time of the legendary music festival in 1969, and was actually on her way there when it started to rain so she turned back. “Who knew?” she laughed.

I’m not sure what I was expecting to hear ... perhaps just one or two to say they were there, dancing wildly in the mud with tall tales about Jimi or Janis.

To be fair, the site of the festival that staged performances from Jimi Hendrix, Janis Joplin and Neil Young is actually 50 miles away and not in Woodstock at all.

Still, the place retains some of its magic and folklore.

The air is fresh and the energy feels good. The mountains are beautiful, as is Lake Cooper, which is two kilometres out of the town.

A short drive in any direction and the road opens up to hidden gems such as diners, flea markets, vintage shops, river walks and beautiful scenery.

The mountain folk are friendly too. We met one lady in her late 70s who was planning a 14 hour drive to Ohio to see her son.

She likes to drive herself and pulls over when she feels sleepy, or when it rains, so beside her in the front seat sits a stuffed doberman pinscher she called ‘Fluffy’.

“I call her my watch dog when I’m asleep plus they don’t know she’s stuffed,” she told me. Only in Amercia.

Life is definitely slower and there is a quaint quality to the houses which are mostly barns or log cabins surrounded by woodlands.

I can certainly recommend the area, and if you have to be stranded somewhere, it might as well be here, but not for too long!