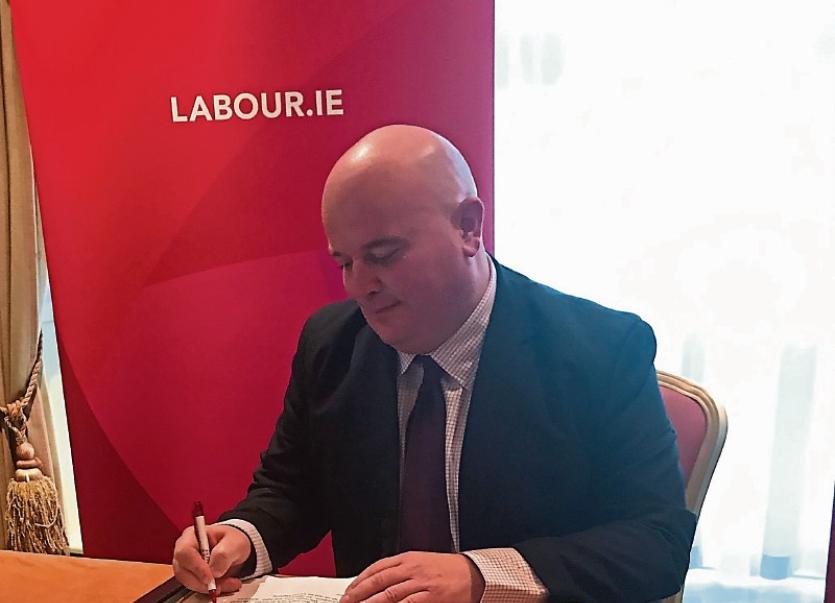 Cllr Mark Wall, who was selected to run for the new seat in Kildare South as part of the boundary changes for the Labour Party on Friday night, said he is ready to tackle the challenges ahead.

The new seat is part of the proposed new electoral boundary changes for the area which will increase county representation in Dail Eireann to eight. The new proposal will see the six electoral divisions of Monasterevin, Kildangan, Churchtown, Kilberry, Harristown and Ballybracken previously voting in Laois be returned to the area. It will also add a further 11,000 voters from Laois and Offaly primarily around the town of Portarlington into Kildare South as well.

Cllr Wall welcomed those future voters as the constituency from parts of Laois and Offaly during his selection speech at the convention, which was held at the Clanard Court Hotel.

“Kildare does not have a Labour Party TD and tonight we together set out to change that,” he said citing the many challenges facing Kildare south including education costs, commuter costs and the  homeless crisis, which he said is being tackled head on in Athy thanks to the new family hub crisis accommodation in the former Dominican Site.

“We are sitting here tonight in a town where 10 families enjoy a family home thanks to a pilot scheme. This pilot scheme brought 10 vacant and derelict houses back into family units , it is this imagination that sets our party apart  ... we are offering  real solutions which must be led by local authorities building local authority homes.”

The Labour Party lost their Dail seat in Kildare South in 2016. Cllr Mark Wall failed to retain his seat at the time, which he inherited from his father, the former TD Jack Wall on his retirement in 2016.

"Since the loss of the Labour Party seat here in Kildare South we have redoubled our efforts to ensure that those that have relied on our party over many years have not lost out. The Labour Party have never forgotten those who need them here in Kildare South, and tonight we send out the message that that help is still available to all even those who changed their vote in 2016."