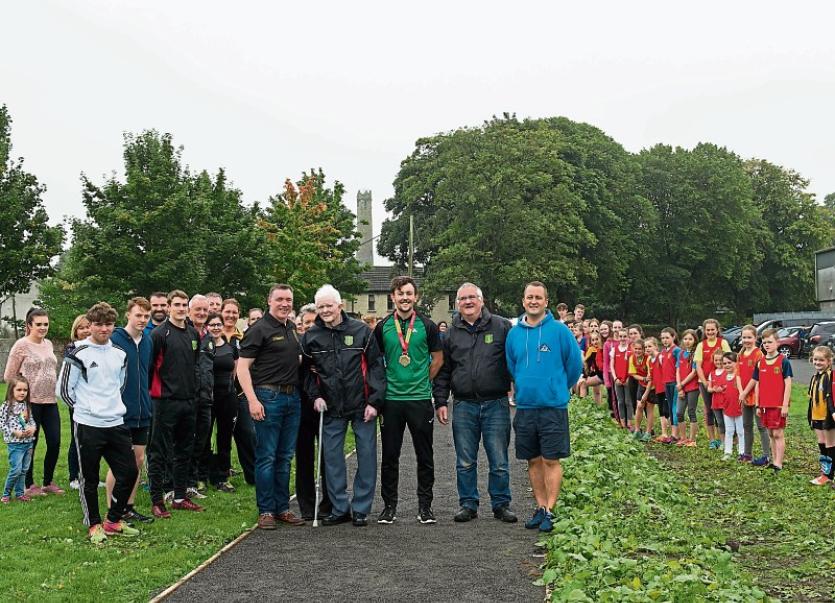 A big crowd turned out for the new track opening

The track is a joint venture between Round Towers Gaa club, Kildare Athletic club and the Kildare Town Running and Triathlon Club and adds a much need piece of recreational infrastructure for the people of Kildare town.

The track is phase one of a larger more ambitious development for St Brigid’s Park which will include an all-weather Gaa pitch and a 300 meter oval competition standard athletics track. There is a natural synergy between the three sporting bodies that share many common members and also share a common vision of better sports facilities for both the youth and the older members of Kildare town. The track was opened by the chairpersons of the three clubs Frank McMahon, Round Towers, Anthony Fitzsimons, Kildare Athletic Club, Mick Barbe, Kildare Athletic Club and Dominic Gleeson KTRTC alongside guest of honour John Fitzsimons Jnr from Kildare Athletic Club. John represented Ireland in the European junior championships in July and came home with a bronze medal in the 800 meters who cut the ribbon.

The clubs say that they are delighted with the progress they have made in a short period of time and hope to make more in the near future.

“With cooperation and a common goal and vision we are sure we can make Kildare town a better healthier more enjoyable place to live in and to grow old in," said Frank McMahon.