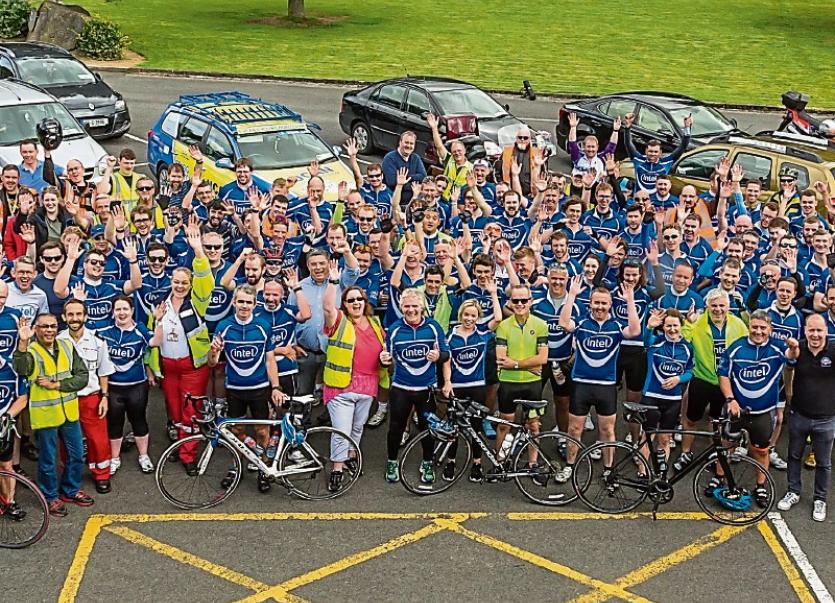 One hundred and forty employees of Kildare based Intel got on their bikes for the annual charity cycle challenge on Friday, September 1 last.

Each of the routes of 50km, 80km or 160km, began at the Intel Ireland campus in Leixlip before taking in various parts of Kildare, Meath and Wicklow, depending on the length of the cycle.

The chosen charities this year are Aoibheann’s Pink Tie and Jigsaw.

The Intel employees, kitted out in distinctive navy and white jerseys formed a colorful formation as they passed through numerous towns and villages including Maynooth,  and Kilcock. The weather too played its part as the rain held off and by lunchtime each of the cyclists, along with the all important support team, were happy to stop for a bite to eat.

There was time for a quick pit stop and the chance to hear from both charities who were onhand to greet the group and remind the participants of how their efforts are making a real impact to the important work of both organisations. The cyclists then set off on their bikes again for the final stretch of their challenge which took them on a return journey back to the Intel campus in Leixlip.

In total, almost 180 Intel employees took part in the Charity Cycle event either as cyclists or as volunteers taking to the road in a number of support roles.

According to organisers there was a fantastic response to the cycle again this year with almost €15,000 being raised overall for the signature charities. "This will be combined with monies raised through other events with the total overall fundraising amount being revealed at the end of the year," a spokesperson said.