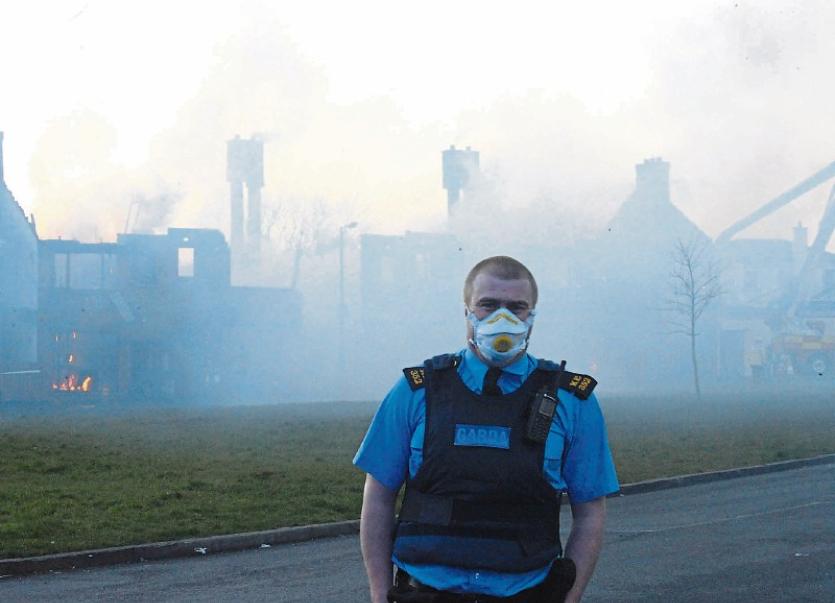 The Department of Housing has said the omission of the Millfield Estate in Newbridge from last week's fire safety report was based on legal advice.

However, it told the Leinster Leader the case study has since been made available in response to a number of Freedom of Information requests including requests from a number of residents in the Millfield estate.

“Don’t leave candles unattended” was the best advice Minister Eoghan Murphy could offer to Newbridge residents who live in timber-frame homes that are a serious fire hazard, claim the residents of Millfield Manor in Newbridge.

The Department of Housing last Friday, August 25 published a report on “Enhancing Fire Safety in Dwellings”.

It is being described as a “whitewash and insulting” by the residents group in Millfield Manor, the Newbridge estate where a terrace of six homes was gutted within 25 minutes in March 2015.

“We are devastated,” said one resident, who did not want to be named.

“It is not the report that was promised by the then Minister Alan Kelly. This report is a farce - and it is an insult to the community.”

The long-overdue report into fire safety had been expected to address specific concerns about construction methods during the boom years using Millfiled Manor in Newbridge as a case study.

SEE ALSO: Call for Kildare's Millfield fire report to be released by the Government

However, the report, has no mention of Millfield Manor anywhere in the document.

Instead, the 26-page document’s focus is on existing regulations and it offers advice on how to prevent fires.

There is no mention of concerns about timber frame construction, or how fast the fire in Millfield spread. It has since emerged however, that this was due to legal reasons according to a statement from the Department of Housing to the Leinster Leader.

Meanwhile the resident said five out of the six gutted houses were rebuilt with solid brick frames, adding that they are now the “safest houses in the country.”

“There is no mention of timber frame anywhere in the report..... It is a unholy mess. You can’t sell your home and you can’t get the money to fix it up. One neighbour spent €17,000 getting his fire proofed.

“We are still in negative equity here and although property prices are going up around the country no body in their right minds would buy a home here.

“I think we are going to have a situation soon where we are not going to get insurance. ”

A statement from the residents of Millfield stated the estate of timber-frame houses built between 2005 and 2009 has been found, through independent assessment, to have serious faulty compartment walls between homes, which are constructed in terraces of six. “These faults led to the major blaze spreading between the six homes and the gutting of every dwelling over two years ago. It was a miracle no one was seriously injured or killed by the fire.” say Millfield Hawthorns Concerned Residents.

“Minister Murphy has been obstructive in how the report is delivered. Only one section, which refers to not leaving children alone in the kitchen and not smoking in bed, is published.”

They add that the case study of Millfield, which was part of the Terms of Reference, has been hived off into a second document which the Minister has not published.”

They note that there is no evidence from the report, published on Friday, that Minister Murphy takes the welfare of Millfield residents seriously.

“The advice contained in the published report is minimalist and a generic risk assessment and not the serious review that was promised to Millfield residents.”

Residents say they are now living with an extreme risk and in fear for their lives that is identified under the matrix in the report.

The Eamon O’Boyle and Associates Report was made up of a working group that included Celina Barrett, Chief Fire Officer with KCC; Sonya Kavanagh, KCC; Martin Riordan, Cork County Council; John Barry and Sarah Neary from the Department of Environment.

Meanwhile a freedom of information request by the Leader to see the Millfield case study was previously denied.