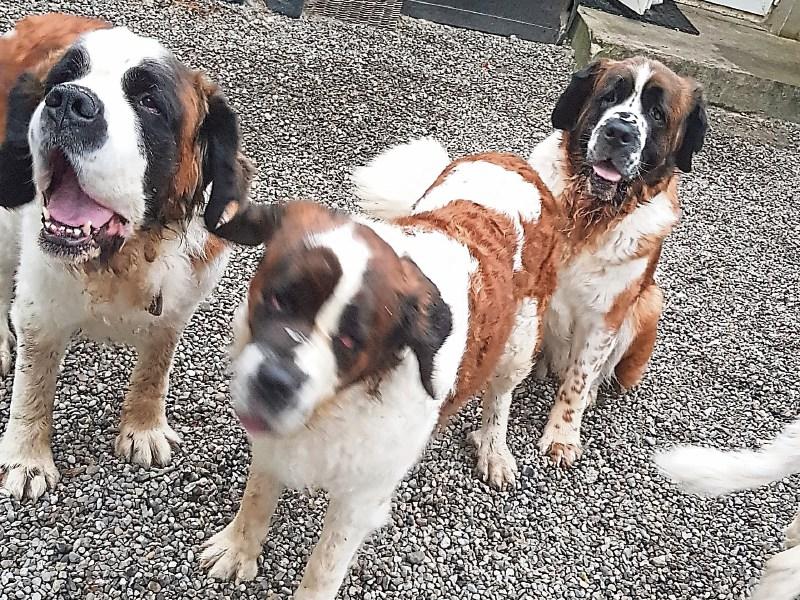 A St Bernard sanctuary in Kildoon has put out an appeal for donations for vet fees and running costs.

Lucy and her husband James Fennelly run the sanctuary with the help of their two daughters and volunteers Aoife Mills and Eve O'Connor.

“They are still waiting on an officer to put them as a charity and give them a charity number,” said volunteer Aoife Mills.

“They have been waiting up to a year for this and if they have it the government will pay for any vet bills for the these dogs.”

According to Aoife there are five Saint Bernards or Saints to be cared for and each has his or her own ailments.

“Buddy was treated badly in previous home and no body cared for him. Buddy is nearly seven.  Butch has a heart condition where his heart beats very fast. Butch is eight this December. He has terminal cardiomyopathy. He's also on heart tablet which are €128 a month. He was given six months to live back in January but he's proved them wrong as we are now nearly in the ninth month with him.  Elsa is nine on the 1 September.  She has a heart condition also on tablets for life. Bailey is six and has an in continuance problem is on tablets for life. And Molly is nine. She has problems with her neck,  she is on Metacam for pain. She also had to have serious attention for an abscess on her womb and has a skin infection. Her treatment is on going. Molly is sick and her vet bills are costing around €700 and continuing.

"We are looking for more donations and  we will be doing fundraising very soon. You can find us on Facebook for regular updates.”

Meanwhile Lucy explained that they are the only dedicated St Bernard Rescue Sanctuary in Ireland.

"We are a not for profit organisation waiting on our Charity application to be processed current information is this can take up to year. Current recurring medical bills alone run at over €180 per month before vet treatments are included.The five dogs we have here now are not for re-homing due to their various health issues, we do offer help with re-homing other Saints and provide assistance whenever possible. The Charity status will allow us to apply for Government grant assistance which will help a bit with the day to day expenses and allow us to hold raffles, fundraisers. We hope to bring some of the dogs to visit any interested local nursing homes, hospitals, Autistic centres as therapy dogs in the future as we believe this will of great benefit to the residents there."