Deep potholes at the Plains in Kildare town 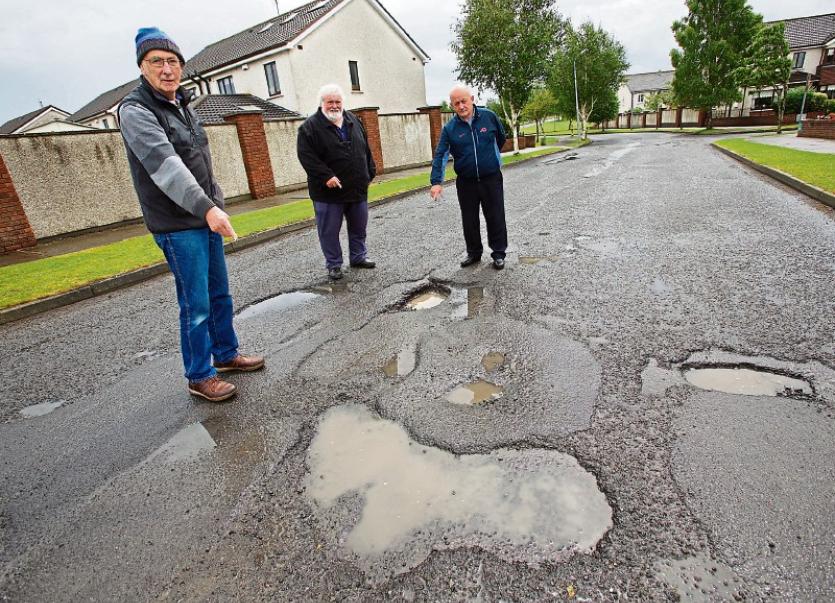 Residents, Ian Weir, John Kennedy, and Mick Gleeson, the Plains Estate, Kildare Town, showing some of the many potholes on the roads in the Estate.

The residents of The Plains estate in Kildare town are concerned about worsening potholes at the entrance to the estate.

Long-time resident Ian Weir said the pot oles have been detoriating over the past two years and the council has done nothing about the situation as the estate has not been taken in charge.

“Some stones flew up recently and smashed a car window,” he said adding that the pot holes were “very deep at the entrance to the estate”.

“People have been complaining that it is not doing the tyres any good.”

A few years ago, after residents raised the issue in this paper, the council filled in the holes. However the situation, according to Mr Weir, is now worse than ever.

“The problem is that we have not been taken in charge by the council,” he added.

“The council said that they are waiting for some payments yet to be paid by the developer. That is the council’s excuse and they won’t do anything until it is paid.”

The council did not respond to a question from the Leader on whether they were still waiting on payments from the developer however at last month’s municipal district officials said the developer was no longer trading and they had been working hard to try to resolve the issues so they could take over the estate. The meeting heard some pipes may also have to be dug up and relaid.

Members heard that the entrance cannot be tackled now or they would have to go back again later and dig it up to sort out the pipes.