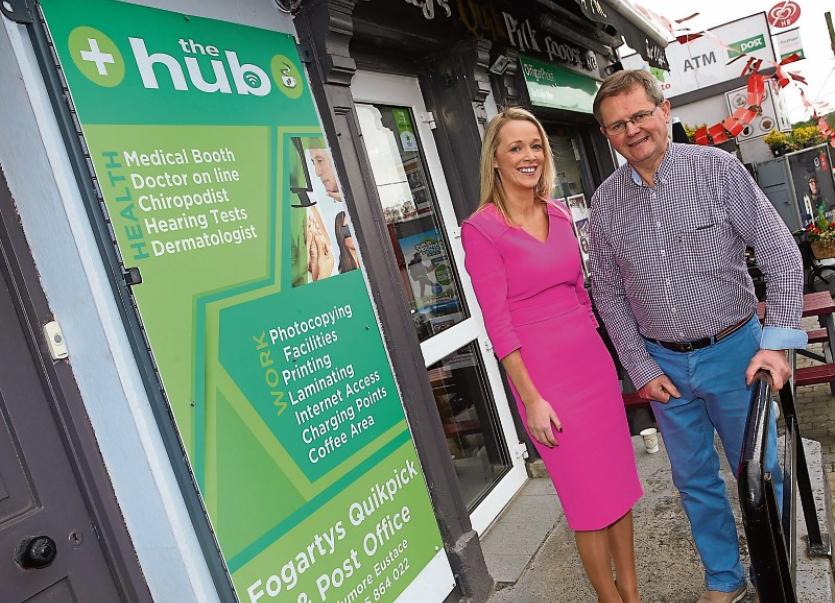 A new online GP and medical consultation service is now available to locals in Ballymore Eustace from the convenience of the post office.

Commencing immediately, locals in Ballymore and in the wider community can access a private medical booth, called The Hub to gain a video service to a registered doctor at a cost of €28 per session at Fogarty’s Quickpick and Post Office.

“It is terrific to have this new service here where customers can come in with a complaint and see a doctor within minutes,” said Postmaster Sean Fogarty speaking to the Leinster Leader.

“We have no full time doctor here in the village so this will be open seven days a week from 8am to 10pm. It is a private service with a medical booth available and for prescriptions you just have to name your pharmacy. At €28 a session it is cheaper than going into a doctor’s office.”

According to Sean the idea for the medical booth came about after a focus sesion held last October identified a need for it in the village.

“It started from a listening session held about six months,” said Sean who has been a postmaster in the village for the past 20 years.

“We had three focus groups whereby people came in from the village to discuss services that could be offered in the community. Video Doc met us in January and they were very helpful and supportive and it went from there. It is the first of it’s kind in Ireland. It is going to give a feeling of security to people in the village to know that they can have a consultation if someone is sick. It is also a way to sustain the post office.”

It is the first offering of its kind for Postmasters, and is expected to form one of the four pilots for additional social services provided by Postmasters, which was recently approved for funding by the Government.

Primarily for minor ailments or straightforward consultations, doctors will have the ability to triage, treat, diagnose, prescribe and follow up with patients.

The booth will also offer access to other health consultations such as dermatology – operated remotely by VideoDoc, with the potential for future inclusion of many other health services.

The Hub will also include additional business, personal and social services such as photocopying, printing, laminating, internet access, phone charging and a coffee area.