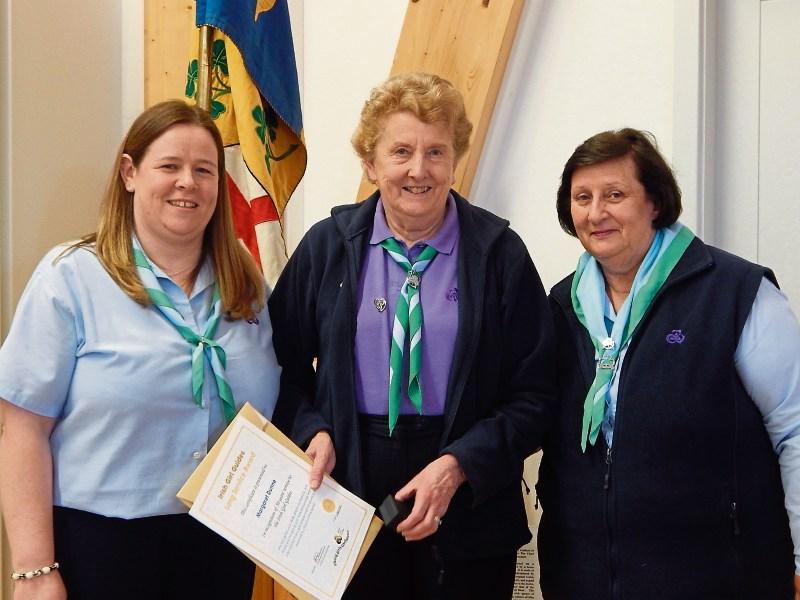 Ms Dunne started her Guiding career as Lieutenant in Rathfarnham Company, Dublin. She subsequently became a Brownie leader in Athy for 7-10 year olds and was responsible for the development of Guiding in the Kildare area for many years. She fulfilled the roles of Area Commissioner for Kildare and Regional Commissioner for Eastern Region before going on to chair several national committees and serving six years as Chief Commissioner. She also acted as the World Conference administrator when Ireland hosted the World Association of Girl Guides and Girl Scouts’ World Conference in 1999.

Presenting the award, Ms Dillon said: “It is with an enormous sense of gratitude that Irish Girl Guides acknowledges today the extraordinary service given by Margaret Dunne over the last 50 years. Margaret is one of the extraordinary women volunteers who has  given exemplary service to our organisation over this time - as a member, a leader, an informal educator and a trainer of other adult leaders. It is through the example of women like Margaret that Irish Girl Guides is the revered and respected organisation of high standing it is and we honour that valuable contribution today.”

Ms Dunne said she was very pleased to receive the award.

“I can honestly say that I have enjoyed all the roles I have been in during my time in Guiding,” she said. “Becoming a member of IGG at the age of seven was one of the best things that ever happened to me – so many avenues opened up as a result. My life has been enhanced enormously by the wonderful people who guided me as a Brownie, Guide, Cadet and adult leader. I really appreciate the effect they had on my life.

“As a member of IGG I received knowledge, skills, opportunities, experiences, fun and, above all, friendship. I really believe in Guiding; it is a wonderful movement and the principles of the Law and Promise are as valid now as they were over 100 years ago.”