Rising rates backlash as packed meeting in Athy hits back 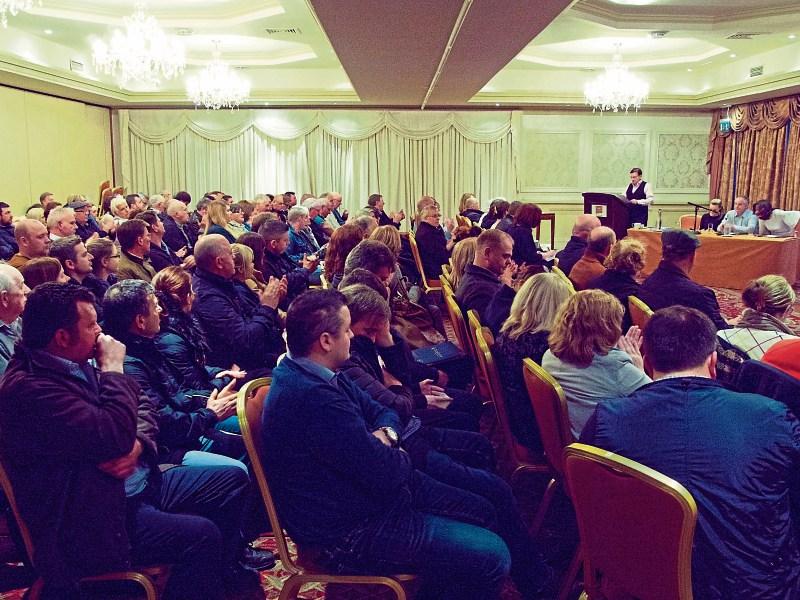 Organised by Marcella O'Reilly and chaired by Eddie Hobbs the meeting was held as a back lash to increasing rates locally of up to 300 percent.

The room was packed with exasperated business men and women who wanted answers and an action plan to offset their sky rocketing rates.

“There is no way I can afford an extra €17,000,” he said. “I get no serivces from KCC. We have our sewage and we don't want services. These increases are crippling and there will be a massive domino effect.”

Horse trainer Jessica Harrington stood up and told the crowd that the equine industry has been badly hit.

Jessica Harrington says with the new rates she will be charged 41k on rates for her sheds alone #rates pic.twitter.com/gBOGmexoyU

“I don't have services. I have my own well and my own sewerage. I paid €6,000 last year and I'll pay the same this year and they can go to hell for the rest.”

Darren O'Reily from the Crookstown Inn spoke about the secondary problem of increasing rates.

“Jessica's (Harrington) staff come in and eat at my restaurant. If she has to reduce her staff then I've less customers, less cash in the till and that's a secondary problem.”

Local photographer Robert Redmond said his rates have gone by €4,000 .

“This is on a small photographers shop. I have been in Athy for the past 40 years. If rates valuations are taken on a rental basis then Athy should be on the bottom. Two shops closed down here in the last fortnight and another one a few days ago. This is not Grafton Street. The recession is still ongoing here in Athy.”

Paddy Bereton from the Vintners Federation Ireland said that rising rates was the nail in the coffin for his industry.

At one stage the floor erupted with the line that charity shops will now be charged rates but local TD offices will not.

The over riding message from the meeting and the advice from local councillors was for businesses to appeal their revaluation rates before the closing date of April 18 next.

Kildare South TD Martin Heydon said the system is flawed and the valuation office has made mistakes.

“The last big revaluation in Kildare was back in the 1980's. Some businesses were paying over the odds for years and they have been offered a decrease. Also the new rates are unrealistic. You need to appeal before the closing date that is vital.”

Deputy Heydon also informed the meeting that the rates paid to KCC last year amounted to €58million and KCC cannot claim more than that figure in rates for this year as that is illegal.

Mary Fennin with the Clanard Court Hotel said that when they first bought the hotel 12 years ago they appealed and saved themselves €150,000 over the years.

“We've had a 35 per cent increase in our rates,” she said. “I would encourage you all to appeal. The savings are there to be made.” An action committee was set up from the meeting.