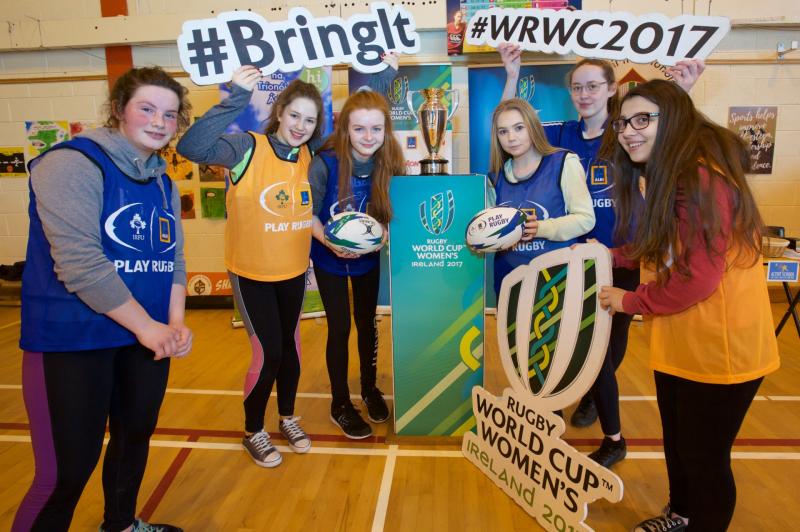 According to James Reeves school PRO Ardscoil na Trionoide, were delighted to jump on the bandwagon to host the trophy.

“The school has a great tradition of sporting achievement for both boys and girls in football, soccer, rugby, basketball and equestrian events, however for a number of years there has been a tendency for many girls to opt out of sport and PE class as they moved into senior cycle,” he said.

“For the four weeks prior to the visit a group of 36 fifth and sixth year girls took part in a range of physical exercise sessions, zumba, body attack, kick boxing and pilates. Recent research has made it abundantly clear that physical exercise is wonderful for everybody’s physical and mental health. Ardscoil na Trionoide already has a Mental Health flag and is currently in the process of qualifying for an Active Schools flag. The tour of the WRWC Trophy was the perfect opportunity to get the girls into exercise mode.”

Active schools coordinator Patriona Bolger, was also delighted with the opportunity to use the visit of the trophy to get the fifth and sixth year girls to get into their gym gear and work out for the four sessions.

“It was really great, a number of the female staff also took part which gave great example to the students and showed them that working out and staying fit is for everyone, no matter what level of fitness they are starting from. There was such positive feedback that  we are hoping to offer some evening sessions to pupils for the summer term also, and where possible open it up to other year groups. We want as many people as possible active as often as possible.”

As part of the visit a selection of students played in a tag rugby tournament and the members of the active school committee were presented with their badges by Orla Fullam-Smith of the IRFU.

Emer Maguire, who leads the team in promoting mental health within the school, was equally enthusiastic.

“It is a great opportunity to show teenagers that exercise doesn’t have to be team or sport based and can be equally fun without the competitive factor which many shy away from. Our aim is to educate for life and to make students aware of what is available so that they can then make healthy choices which suit their own personality and lifestyles."

The visit of the Trophy was described overall as a great opportunity to focus on the importance of women’s sport in school and all the girls who participated, both in the weekly workout sessions and the Tag rugby, had a great time.