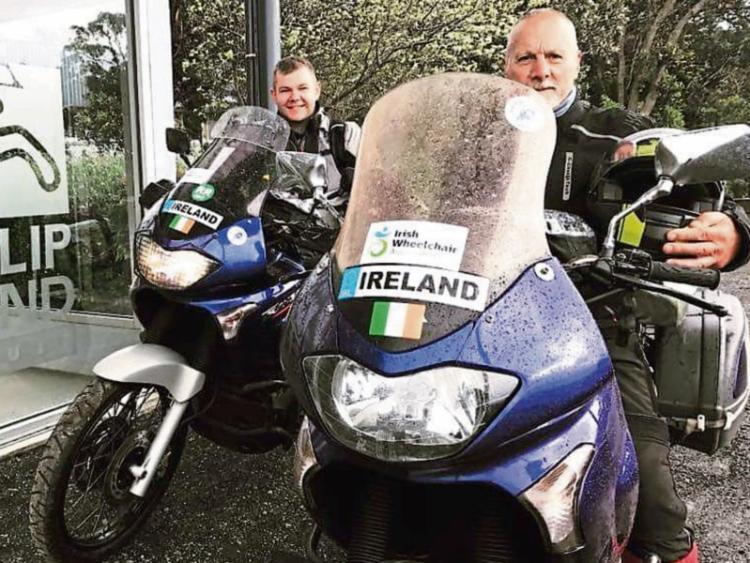 Niall (29) and his friend, Frank Savino (72), began a trip earlier that summer which took them through some of the more notorious regions on the world.

They were prompted to do the trip to raise money to enable the Irish Wheelchair Association at Clane buy a bus. They raised €6,000 for that cause with many individual contributions including €300 from De Mario’s restaurant in Celbridge, which he rates highly.

The Leader met the two lads at the Westgrove Hotel in Clane just before the snowfall.

Among the places where they stayed was beautifully named spots at Crooked Lake in Canada and Happy Land Park. “Canada was very friendly and they were inquisitive,” they said relaying stories about armies of bikers.

At Emerald Lake in Canada, they met, by arrangement, a Celbridge girl, (from Stacumny) Oriel Corway.

Most things went well but Frank fell off his bike in Pakistan shortly before the end of the trip.

Luckily for the lads, they were officially accompanied by an armed police escort for all of their 8 day journey through Pakistan.

It was interesting to learn there was no requirement for motor insurance in India, Pakistan and Iran.

While both Pakistan and Iran were Islamic countries, they saw hardly any women in Pakistan but saw many more in Iran. “There were plenty of women driving,” they said.

In Lahore they stayed with the brother of a petrol station attendant they met on the Canada leg. “The Pakistani people are the salt of the earth.” Their welcome included being allowed to sleep on the floor of the police station in Pakistant.

Frank did not really have a favourites place. “Celbridge County Kildare will do for me,” he said.

Niall won’t forget the Golden Temple at Amristar, India. As bikers, neither will forget the Phillip Island Grand Prix Circuit in Australia.