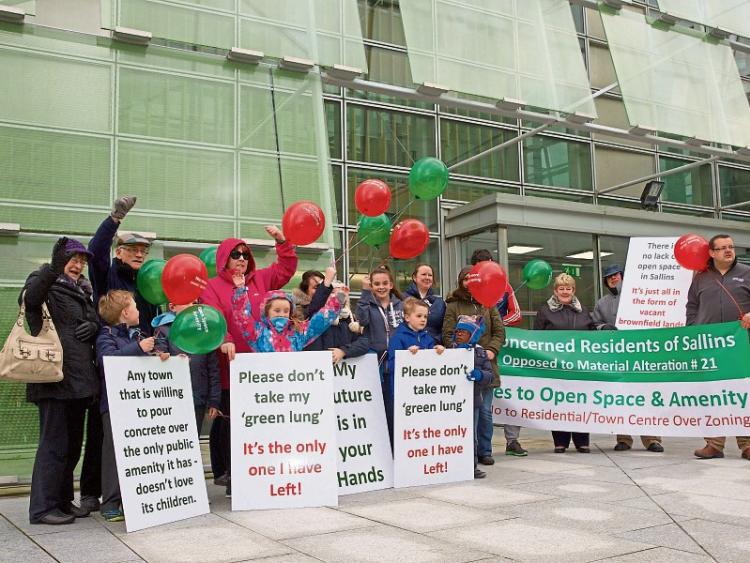 Local politicians are on a collision course with the incoming Minister for the Environment over a land rezoning decision.

Eight members of Naas Municipal District voted recently to rezone 70 acres of land owned by the McCarthy family at Clane Road, Sallins. Newly elected TD James Lawless did not attend the meeting and is precluded from joint roles.

Forty acres have been changed to recreation and amenity use with most (25) likely to be used as a new GAA centre; seven allocated for community use; five for the soccer club and three for education purposes.

An adjacent 30 acres of land was rezoned for residential purposes. All this land is owned by the McCarthy family, who operate a meat processing plant in nearby Clane.

Despite warning from Kildare County Council’s Director of Planning Peter Minnock that the unanimous vote would effectively contravene planning legislation, the councillors opted to rezone.

Their decision could yet be overturned by the Minister for the Environment.

At the same time they decided to maintain the Sallins GAA lands as open space and amenity.

The GAA club had sought support for a rezoning of this 7.5 acres site to residential in the hope that an eventual sale would provide some of the money needed to develop new pitches and facilities at Clane Road. Instead the councillors accepted a recommendation by KCC Chief Executive Peter Carey that this revert to open space and amenity. Again, all of the councillors accepted this.

Cllr Darren Scully said that the handing over of 40 acres would represent a significant gain for Sallins.

He stated there were examples of sports facilities on the periphery of towns like Piper’s Hill in Naas and Sarsfields GAA in Newbridge.

He also said the planned by-pass of Sallins will include a roundabout close to the Clane Road site, making it very accessible.

“This will give the people of Sallins the right to amenities and a school,” said Cllr Scully.

Cllr Rob Power said all community groups in Sallins favoured rezoning. He also said the zoning is unaffected by a Supreme Court case, involving KCC, because none of the land is being transferred to KCC.

Cllr Power predicted that in three years time the site will be “the most accessible in Sallins and is ideal for community facilities.”

Deputy Mayor Fintan Brett, who chaired the meeting in the absence of newly elected James Lawless, said the councillors “have to do what the community wants”.

Cllr Seamie Moore said the overall plan for Sallins is more focused on the economic development of the town and is less about community development. He said community infrastructure development in Sallins has been “nil” in the time the population grew from less than 1,000 to over 5,000.

“Land zoned for recreational use is only of use if it is actually available.”

He warned: “We have to prevent problems that happened in Tallaght and Ballyfermot, where there was development but no amenities until 30 years later when social disorder had taken over. We don’t want that to happen to Sallins.”