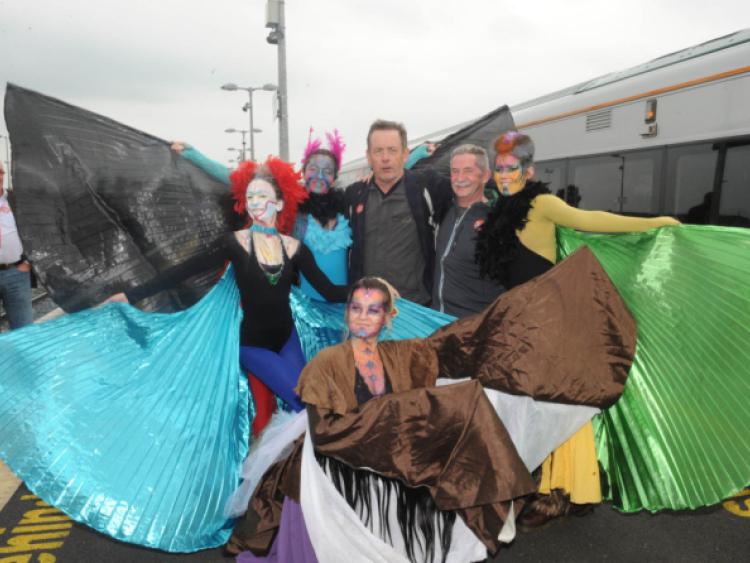 The Big Music Train pulled into Newbridge on Monday morning to a warm welcome from the Kill Singers belting out ‘Chattanooga Choo Choo’.

The Big Music Train pulled into Newbridge on Monday morning to a warm welcome from the Kill Singers belting out ‘Chattanooga Choo Choo’.

“What a way to arrive into my hometown of Newbridge,” said singer Luka Bloom who was joined on the platform by fellow musican and friend Philip King.

“What a thrill. I was at Connolly Station at 8am this morning [Monday] and what a way to spend a Monday. There was a lot of singing on the train. I will be singing a song that I wrote for my good friends the Brigidine Sisters in Kildare Town called ‘Don’t be afraid of the light within you’.”

Hundreds of school children and supporters lined station car park and poured out onto the streets to cheer on the musicans. One banner simply read ‘Thank you for the music’.

Numerous local school bands including the Scoil na Naomh Uilig band played alongside the Irish Army No 1 Band as the musicians and singers arrived into Newbridge Station.

RTE’s Miriam O’Callaghan and Newbridge Town Mayor Mick Deely took time to join in with the Kill Singers Choir for a quick verse.

The Irish Army No.1 Band then lead the parade from the Station down Main Street followed by local schools and voluntary groups in time for a concert which featured Christy Moore, Celine Byrne and Tammy Browne among others at the Patrician Secondary School.

“It was absolutely beautiful,” said Pat Maloney from the PBS.

“Chrisy Moore turned up at the shcool at 10am this morning [Monday] to tune up. He was joined by Luka Bloom, Celine Byrne and Tammy Browne as well as other local bands.”

Local music teacher Michael Monaghan from the Newbridge School of Music joined in the parade.

“Anything that promotes music is good - we also like to promote music from the individuals point of view.”

RTE Big Music Week is described as an annual celebration of music from late September to early October, featuring a mass of live country-wide musical recording and live sessions encompassing the cream of national and local talent.

The Big Music Train is part of anational roadshow, which aims to celebrate and promote the vibrant music scene outside Dublin.

A host of musicans joined the RTE Concert Orchestra on the route down from Dublin and then proceeded to keep dates in Carlow and beyond to continue the celebrations and spread the musicial word.