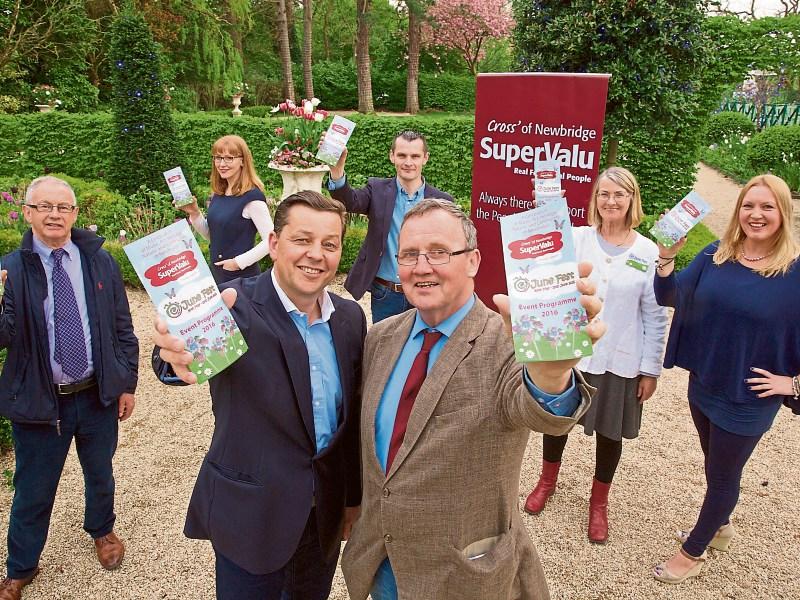 If you’ve ever wondered what it would be like to watch a play being performed from the back seat of a car, now is your chance.

This quirky unique event is one of the 45 activities planned for this year’s June Fest in Newbridge, which started yesterday, Monday May 30, and runs to June 19.

6 Short Plays in 6 Parked Cars is being organised by Kildare Youth Theatre (KYT) in the SuperValu car park on June 4. Over 100 artists, writers and musicians are taking part in this year’s festival, which boasts the biggest line up ever.

“We are a celebration of Newbridge through music, through art, through heritage, through nature and through sport. We started off with a weekend, last year we had two weekends and a quiet time in between and now this year we have a three week festival,” said Noel Heavey, June Fest chairman.

He told those in attendance at the launch on Wednesday May 11 how he wanted it to be accessible to everyone with 80 per cent of the events free of charge, and the maximum price for any single activity €12. He spoke about the festival’s successful precursor, Bealtaine, which was formed by Mary Lenehan and Peter Hussey.

He thanked local councillors and Kildare County Council for their support as well as all the volunteers and committee members who help organise this year’s festival.

He said the action packed programme of events would not have come to fruition if it were not for the sponsorship from Andrew Cross from SuperValu, Newbridge.

“We are very much about local community and being involved in the community and this is what this festival is about,” Andrew told the audience.

He said SuperValu had added a foodie themed element to the festivities with chef Kevin Dundon returning for the cookery demonstration at the family day on June 12.

He said they were also promoting local artisan producers with 25 local suppliers exhibiting on the day. He congratulated the committee on all their hard work.

There were performances from Ciarán Dwyer, and duo, Peter Byrne and Conor Mahony interspersed with an impressive drama sketch by Caolán Dundon of KYT.

The enthusiastic Mary Lenehan said that some of the smaller events have the potential to, as Seamus Heaney once said “catch the heart off guard”.

She highlighted Eilish Moore’s exhibition of watercolours at Chat’n Chew on June 5, Ciarán Dwyer in song and Tall Tale at the Keadeen on June 9, a watercolour workshop with Alan Walsh and Gerry Loftus’s open air Tai-Chi at the Linear Park on June 14.

Deirdre Lane spoke about the Sustainability Expo at Bord Na Móna on June 4 featuring green talks, films, demos using virtual reality devices, music and climate change info for all the family. She praised the work of Ger Ahern and Déaglán De Paor and Newbridge Tidy Towns and thanked them for their support.

She also mentioned the local ICA, which has some colourful surprises in store as part of their Yarn Bomb in the Linear Park from June 1 to 19.

Referring to the family fun day, committee member Liam Browne said; “It far exceeded, in terms of the numbers, what we were expecting last year. We had in excess of 7,500 people on that day. There has been nothing but positive feedback from that.”

This year, it takes place on June 12 following Newbridge Athletic Club’s 5k and 10k road race. From 2pm to 5pm there will be a Kevin Dundon Cookery Demo, band recitals, dancing, arts and crafts, street entertainment from Artastic, food stalls, a spectacular parade and a Garda Siochana Open Day.

Sgt Brian Jacob said the gardai wanted to bring the children into the station in a safe environment and show them the work they do. He said the mounted unit would be present and he hoped to have members of the Sub-Aqua unit, the regional response unit, a forensic scientist and other emergency service agencies. He said 3,500 visitors passed through the station doors last year.

Gay Brabazon highlighted the afternoon tea with Three Newbridge Sopranos on June 6 and the gig on June 17 at Judge Roy Beans featuring Steve Wickham from The
Waterboys.

Other events include The Curragh Ramble on June 11 and The Wisdom of the Tarot on June 8. Young PBS student, Stephen Molloy will also be exhibiting his origami paper crystals.

For the full programme of events, see www.junefest.ie.