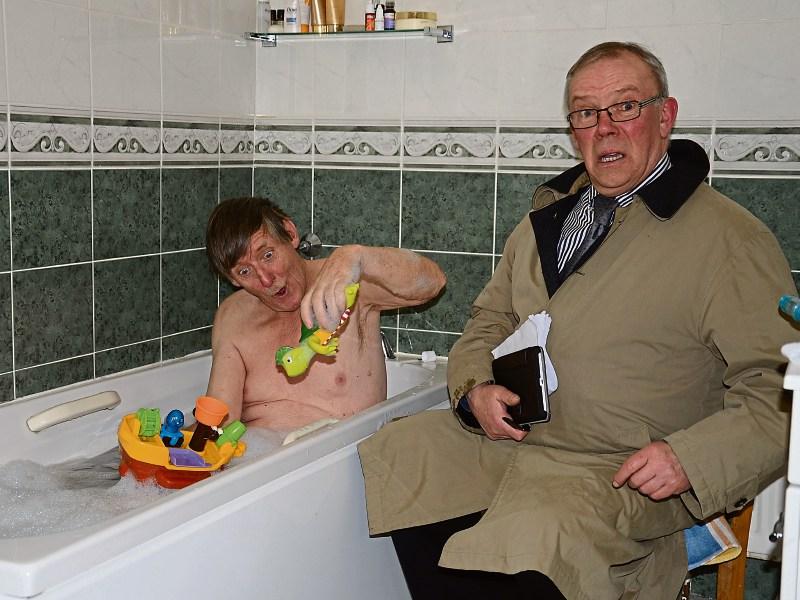 Bernard Berney and Vivian Cummins in character in 'The Quare Land'

Kilcullen Drama Group is delighted with the amazing success of its production of John McManus’ new comedy, “The Quare Land”, which has sold out for the first week of its run.

This experience is unprecedented for the group in its previous 20 years of a variety of presentations in the Town Hall Theatre.

Group member, Bernard Berney, suggests the runaway success of this particular play is due entirely the wonderful comic-writing skills of young playwright John McManus. Berney confidently predicts that Mr. McManus will be a major star in Irish play-writing circles in the immediate future, as his work combines “the comic genius of Martin McDonagh, without McDonagh’s darkness, and Brendan O’Carroll, although considerably more subtle in his humour than O’Carroll.”

Another member of the Kilcullen Drama Group, Eilis Phillips, is of the opinion that John McManus’s humour appeals to all age groups. She asserts that his play, “The Quare Land”, an anarchic parody of Irish country life during the “Celtic Tiger” years is a potent antidote to post-austerity blues.

The play concerns the shenanigans that ensue when a hugely wealthy property developer, Rob McNulty (played by Vivian Clarke), arrives in Cavan to attempt to purchase a five acre field from a 90 year old bachelor, Hugh Pugh (played by Bernard Berney). The role of one of the principal characters in the play, Jessie the Dog, has yet to be cast.

It is also interesting to note that the playwright, John McManus, will attend the performance on Saturday April 16.

The play will run for an additional four nights from Wednesday April 20 to Saturday April 23.

Vivian Clarke predicts that this production of “The Quare Land” will become Kilcullen Drama Group’s equivalent of Agatha Christie’s London West End success with “The Mousetrap” which readers will remember ran for over 64 years.