Tucked away off a country road, a few kilometres from Monasterevin and Rathangan, just past Ballykelly Mills where  construction work is ongoing on rock star Bono’s whiskey distillery, is a little slice of quiet, calm, still bogland heaven.

This is Umeras bog, where last year Bord na Móna ceased its peat extraction operation. A court decision forced more regulation on the semi-state body in its industrial peat harvesting in order to protect the environment — a move that has sped up its withdrawal from former working bogs across the midlands.

The question now is what to do with what’s left of the bogland sites — and a community-driven initiative in this quiet corner of Kildare wants to breathe new life into this historic and ecologically important little bog. The aim is to first protect and conserve what is there by creating a wildlife and ecology sanctuary; with a longer-term plan to create a leisure amenity for locals. A later phase would see the creation of a sustainable tourist attraction to entice visitors from the nearby Blueway — and those visiting better-known sites such as Kildare Village, Newbridge Silverware or the Curragh Racecourse — to this beautiful, though lesser-known corner of the country where Kildare, Laois and Offaly meet.

The committee, inspired by the likes of the Lough Boora boglands amenity in Offaly, approached the Irish Peatlands Conservation Council in July 2019, on hearing that Bord na Móna were stopping peat production at Umeras.

The IPCC put the group in touch with Bord na Móna and the National Parks and Wildlife Service, and momentum and backing for their vision for the bog is growing.

A visit to the site as it is now is revealing. The visitor is brought through an overgrown and neglected but peaceful landscape along a lush, grassy and tree-lined entrance.

It is easy to see how the group’s vision for Umeras could become a reality. A disused former shed on the site is big and sound enough to become a new visitor’s centre, telling the story of bog life in this part of Kildare.

There is a raised mound which would make a perfect site for a visitor’s cafe, overlooking a tangle of bog oak and ancient tree roots that looks like something out of Game of Thrones’ King’s Road. Old machinery which would delight kids is strewn about the place. There’s several kilometres of old railway track and a little station which would make a charming visitor attraction if put back in working order.

But mostly there is just the bog itself — the quiet, still landscape that hides a whole world of ecological diversity, flora and fauna. 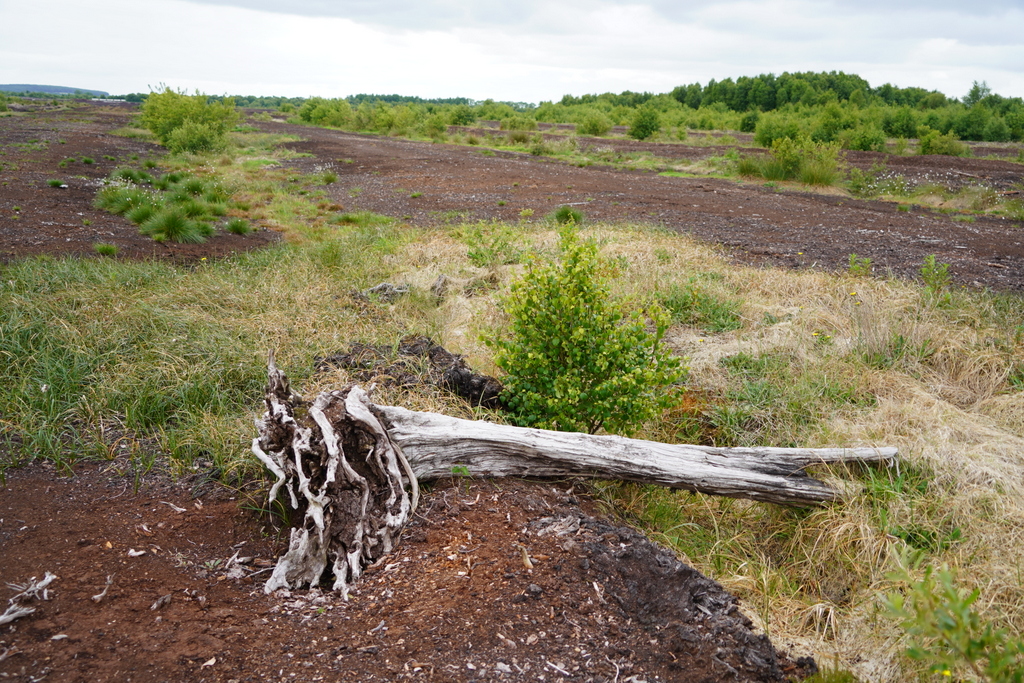 Local man Eddie Smyth, who lives on the edge of the bog, is one of the driving forces behind the project. Eddie is an ecologist and a rural development expert, with experience managing community development initiatives attached to multi-million dollar projects around the world.

He is bringing that experience to the Kildare project, which he can visualise as a major tourist attraction for the area.
Umeras bog is around 600 acres — comprising some 500 acres of cut-away bog, 40 acres of raised bog and 60 acres of birch woodland, drains, bog railway and a works yard. It was relatively isolated — turf was harvested and then trucked to the power stations.

Its relatively small size makes it ideal for a community project, according to Eddie. It measures just 2sq km — perfect for a cycling or walking track, but a far cry from the likes of nearby Lullymore or Mount Lucas.

This bog was never a huge local employer — only around 10 people would have worked there in recent years, but there are community turf banks nearby — a local activity that could be incorporated as a feature of the Peatlands Park.

Creating a Peatlands Park would not affect local people cutting turf, but it would, say the committee, preserve the 40 acres of raised bog at Umeras for the future, and prevent it being dug out by contractors in time to come.

Bord na Móna is rewetting the bog — that is, blocking the drains to hold the water in. This will cause the water level to rise, and over the next few years certain areas of the bog will become wetlands, with small lakes and rushes growing.

“Bord na Móna in their strategic plan for the midlands have no defined use for this bog,” said Eddie. It is not big enough for a wind farm, and the semi-state’s original plan was to simply carry out minimal rehabilitation on the site.

But there has been widespread support for the Umeras Community Development project. It has received backing across the political spectrum in Kildare, and support from the heritage officers in Kildare, Laois and Offaly, Kildare Fáilte, Kildare Leader Partnership and the Irish Peatland Conservation Council, along with a positive reception from Bord na Móna themselves. The Peatlands Park project will be carried out in full partnership with the semi-state body, said Eddie.

Bord na Móna has stated that “we are willing to work with Umeras Community Development to explore this opportunity further, and in principle we consider a peatland park to be an appropriate future use for the site”.

As it is, Umeras bog is an area of significant ecological interest. “In the winter time, whooper swans come in and winter on the Barrow River. The land floods all the way up to the north and west of this bog, and that creates habitats for wintering birds,” said Eddie.

“This year there were four pairs of nesting curlews in this area, which I understand is the greatest concentration of nesting curlews in the east of Ireland this year. There is already some nesting lapwing in this area, and the hen harriers come down from the Slieve Blooms to hunt here in the winter, and they are one of the rarest birds of prey in Ireland. There’s already pine marten and red squirrel here.”

A couple of projects destined to bring visitors to the Monasterevin and Rathangan areas are currently underway. Work is starting on the multi-million Barrow Blueway, which will run from Lowtown near Robertstown down to Athy, and will eventually enable a cycling link to Dublin city centre.

Work is also afoot on a €5 million whiskey distillery and visitor centre — in which rock star Bono is reputedly an investor — which will rejuvenate the 200-year-old Ballykelly Mills, just a couple of kilometres from Umeras, and draw tens of thousands of visitors annually. 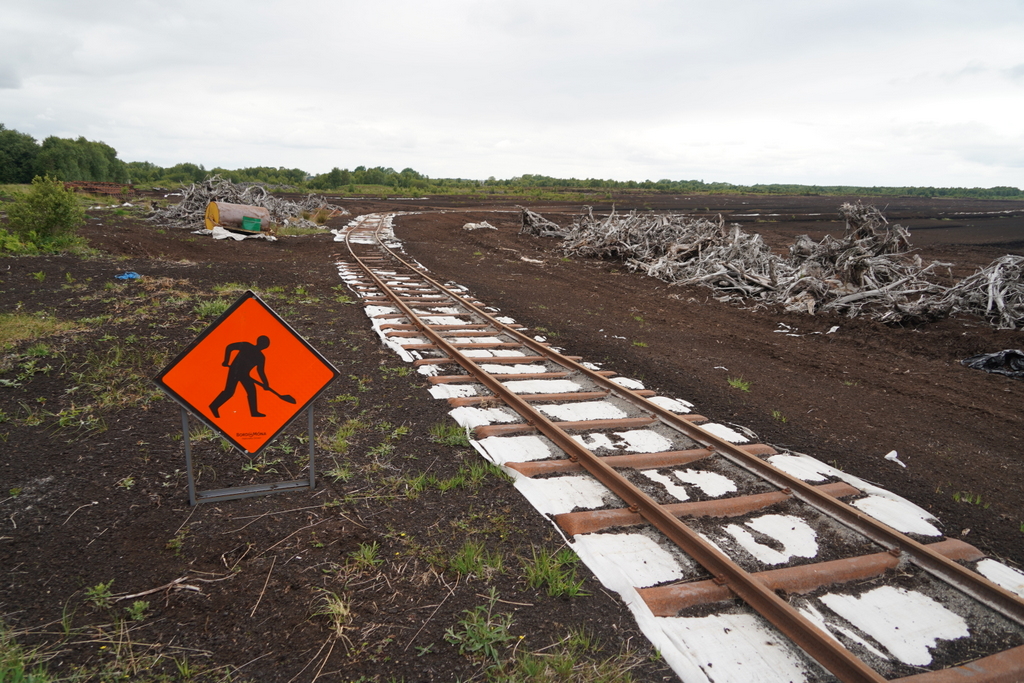 “It’s a triangle — you’ve got the bog, you’ve got the Blueway and you’ve got Ballykelly Mills, and then either side you’ve got two towns which are very neglected economically — but that has an advantage in that they haven’t been all built up. Rathangan and Monasterevin have got a lot of heritage buildings, so they’re the kind of towns that tourists want to see — pretty heritage towns.

“This bog is 3km from Monasterevin and 3km from Rathangan. It’s far enough away not to be an anti-social den, but it’s close enough for people to walk or cycle out from the towns.
“If you think about green tourism, you can come down on the train from Dublin to Monasterevin, walk out here or hire a bike in Monasterevin and cycle out, got to Rathangan for lunch, go to Ballykelly Mills and got back on the train to Dublin — or even stay a night.”

Another cohort of tourists which could be enticed to the area would be the busloads of tourists that — pre-Covid-19 lockdown — were a regular sight at Kildare Village or Newbridge Silverware.

A package of a Ballykelly Mills tour, a visit to the boglands at Umeras and a barge ride would provide an attractive, accessible package of rural Irish sights that would appeal to that market.

Increased visitors to the Umeras bog would not endanger its ecology, says Eddie. The visitors would be limited to a track, which would leave a huge area of untouched bogland for flora and wildlife.

“The wintering birds come here in the winter when there are very few tourists around anyhow, so it would be very sensitively designed to limit impacts,” he said. “Here you have a ‘blank slate’ and you can design around the biodiversity and achieve a balance.

He added: “The infrastructure is minimal. The area looks big but really, we’re only going to manage 20 acres that will have infrastructure on it, and the rest of it is letting nature do its job.”

The Umeras Peatlands Park would be developed in stages over a five-to-10 year period, depending on the funding available, according to Eddie.

“Right now, it’s a nature conservation project that the community can partner with Bord na Mona, and you could have local access from the community to monitor it and walk around it.

“Then you can put in a hard cycle path, join up with the Blueway, put in some signage, you could put a toilet here and a little visitor cafe, and people could come out here on a Sunday and go for a walk around it.”

A third phase would see the development of the railway as an attraction, the putting in of a boardwalk with disabled access, and installation of a viewing pavilion, a sculpture park and a visitor’s centre.
Overall, it will be a low-key, nature and peatland conservation centric project. It would cost between €1-1.5 million to develop, depending on the sophistication of the infrastructure.

If Bord na Móna were to commit further funding and workers to the project, it could even be up and running in three to four years.

People in the local area of Lackagh, Mountrice, Quinsboro, Monasterevin and Rathangan have shown great support for the project so far. They have also put their hands in their pockets to back it. Over €8,000 has been raised via a GoFundMe fundraiser. The group has made an initial application to the Just Transition Fund — under which €11 million will be available this year to help midlands communities and businesses adjust to the closure of bogs and power stations — for a feasibility design study for the project, and the money raised with help co-fund that.

The group will also explore what other sources of funding are available to fund the different phases of the project — which, as a sustainable green tourism enterprise, should be an attractive prospect. 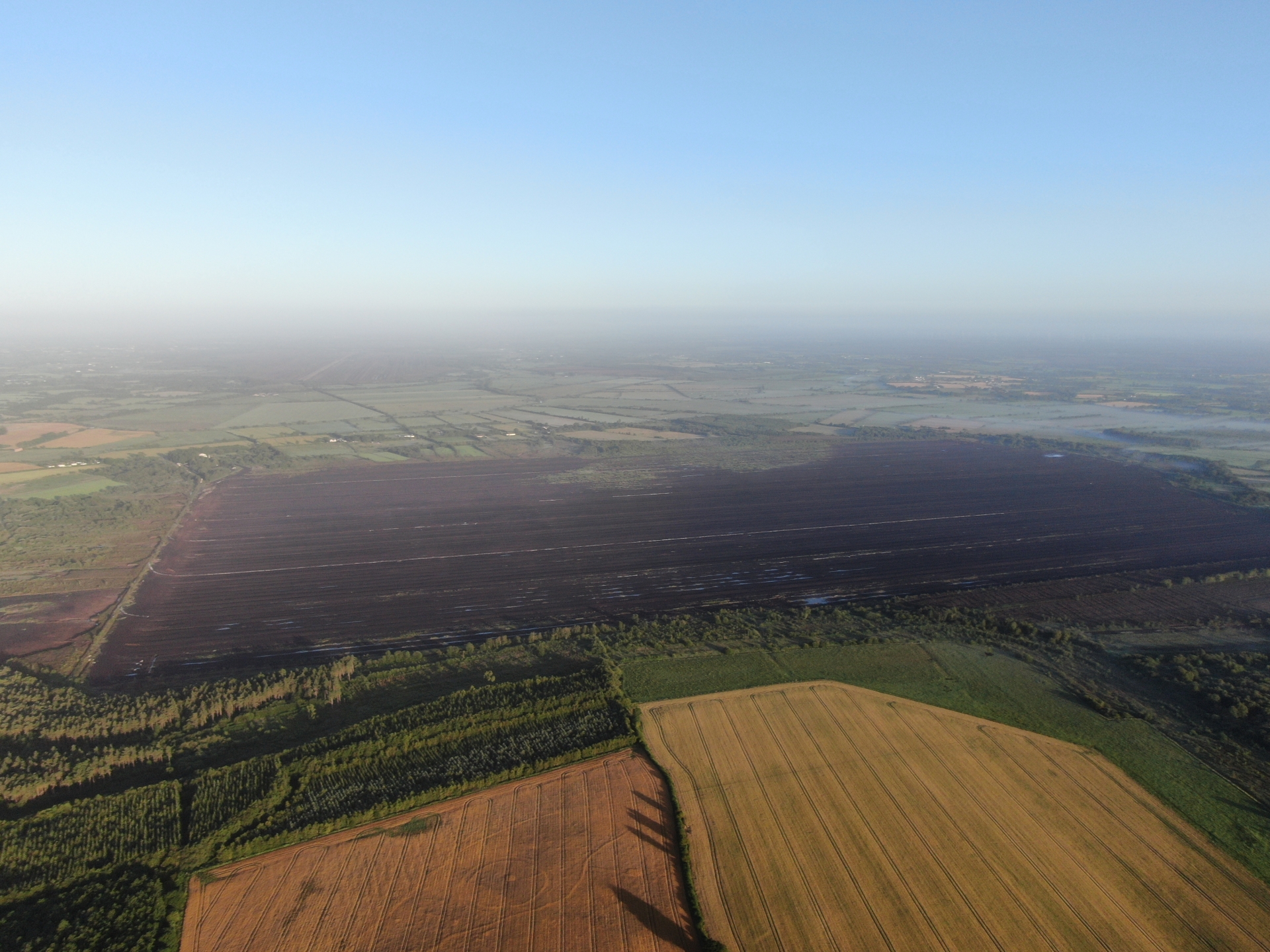